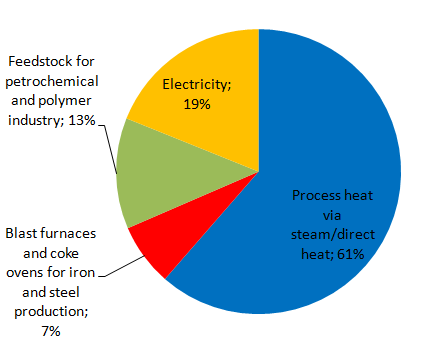 Industrial renewable energy deployment is lagging behind renewable installations in the construction sector – this was one of the key findings of the REmap 2030 study carried out by the International Renewable Energy Agency (IRENA) in June 2014 to identify measures that could double the share of renewables in the global energy mix by 2030. To close the knowledge gap, the IRENA Innovation and Technology Center in Bonn, Germany, has published a technology roadmap focusing on the potential of renewables in manufacturing businesses worldwide. In contrast to REmap 2030, which had followed a bottom-up approach aggregating 26 country studies, the current roadmap, Renewable Energy Options For the Industry Sector: Global and Regional Potential until 2030 from March 2015 took a top-down approach (see the attached documents): The first step was to identify the energy demand in the industrial sector worldwide and the second to analyse the technical and realisable economic potential in this segment for four renewable technologies: solar thermal, heat pumps, biomass and geothermal. The pie chart shows the breakdown of 2009’s final energy demand from the global industry sector of 128 Exajoule (EJ). Some of the blue pie slice can be covered by solar thermal.
Chart: IRENA
Based on IEA projections, the authors of the study Renewable Energy Options for the Industry Sector estimate industrial energy use in OECD countries to decrease by about 15 % until 2030, whereas energy demand will increase by 20 % in non-OECD countries during the same period. Hence, the total final energy demand of the industrial sector will increase to more than 152 EJ until 2030.
“The majority (>90 %) of the potential for solar thermal and geothermal technologies lies in new capacity, assuming that new plants would be constructed in regions that can accommodate the space requirements of solar thermal technologies, either on roofs or land near geothermal energy sources,” the authors of the study conclude, limiting the technical potential of solar thermal to process heat at a maximum of 15 EJ in 2030 (see table 1). With 41 to 80 EJ, the technical potential of biomass is significantly higher because biomass combustion is the only alternative to fossil fuel-based high temperature heat generation above 250 °C and feedstock use for materials production. The realisable economic potential for solar thermal goes down to between 0.9 and 3.8 EJ because of the still relatively high costs of solar thermal equipment.
Table 1: Solar thermal ranks second based on the realisable economic potential in the industry sector for the most favourable renewable scenarios. In this table, biomass figures account for energy supply and feedstock within the chemicals industry.
Source: IRENA
“Based on other reports, we have used the assumption that high capital costs currently restrict the deployment of solar thermal systems in industrial applications,” the authors of the study write. Since IRENA’s technology roadmap team uses a static Excel model for scenario calculations and not a dynamic one, the study’s authors have specified fixed cost reduction values for each technology. Solar heat technology is said to decrease capital costs by 35 to 50 % up to 2030. In absolute figures, this means that solar thermal costs for low-temperature process heat could drop from between 80 and 160 EUR/MWh in 2009 to between 30 and 110 EUR/MWh in 2030, and solar thermal costs for high-temperature process heat could reduce from between 95 and 225 EUR/MWh in 2009 to between 40 and 160 EUR/MWh in 2030, ranges are the result of different figures depending on region, technology and cumulative capacity installed.
Table 2: Assumptions on capital cost reductions and heat costs for various heat generation technologies. The figures refer to the most favourable renewable scenarios with a steep technology learning curve in reneable heat technologies.
*Heat production costs are based on assumptions about energy price increases.
**Capital cost reductions are based on an IEA study from 2007
Source: IRENA
The average global level of solar thermal heat costs in 2030 for low- as well as medium-temperature applications is still considerably higher than heat costs of fossil fuel or biomass boilers, which limits the economic potential of solar thermal technology (see table 3). “If regional CO2 prices and fossil fuel prices are high, solar thermal process heat technologies may be cost-effective,” the authors of the study write. They see the “realisable economic solar thermal potential in small scale plants and less energy-intensive industries like the textile and food sectors, but the vicious circle of high initial capital costs and low deployment rates needs to be broken.” Biomass has the largest substitution potential among renewable technologies, but “immediate and internationally coordinated action is required to alleviate the serious supply constraint of sustainably sourced and low-cost biomass resources, and to deploy the most resource-efficient biomass use applications,” was one of the key points made by the study.
More information:
http://www.irena.org
http://irena.org/remap/
https://solarthermalworld.org/wp-content/uploads/2015/06/irena_re_potential_for_industry_2015.pdf
https://solarthermalworld.org/wp-content/uploads/2015/06/remap_report_june_2014.pdf