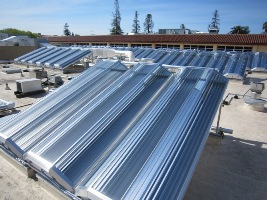 “Chromasun MCT harvests more usable solar energy on a particular space than is possible with conventional PV or thermal technologies,” Peter Le Lievre, CEO of Chromasun, says. He founded the company three years ago. The Chromasun MCT panels will produce an estimated 6,727 therms of energy annually (197,150 kWh/a), and heat water to more than 100 °C for Benson Memorial Center’s dining services. Located on the southwest corner of the Santa Clara University campus, the Center is the heart of campus life for students with food service venues, conference rooms, a post office and administrative offices. Heating water with solar energy rather than with natural gas will reduce the building’s water-heating bills by as much as 70 %. The Chromasun collectors contain a classic Fresnel reflector, which is housed together with a stainless steel receiver tube. Each element has a solar aperture area of 3.5 m2, resulting in a specific yield of 939 kWh/m2.

Chromasun offered the university a contracting solution. “Energy security was the major driver of our decision to undertake this project,” Joe Sugg, Assistant Vice President of University Operations at SCU, says. Per the terms of our ten-year leasing agreement, we will pay a fixed price for the energy the system produces, shielding the university from natural gas price volatility. We’ll also own the system when the lease is up.”

Consequently Chromasun was able to apply for the CSI-T rebates on behalf of SCU. CSI-T is a performance-based incentive which supports commercial solar thermal systems by paying annual grants based on the monitored energy output of the system. CSI-T pays 70 % of the rebate upfront and another 30% ‘true-up’ after 12 months metering. According to Chromasun, the payback period of the Santa Clara installation is around 6 years – taking the CSI-T subsidy into account.

In addition to SunWater Solar’s role in setting up the Chromasun MCT modules, construction management company Gordon Prill and mechanical contractor Therma installed most other components of the SCU system, including copper piping and collector mounts. “We have worked with nearly every type of collector under the sun,” Justin Weil, President of the 2007 founded company SunWater Solar, says. “What impresses us most about the MCT collectors are their aesthetics, their versatility and their ease of installation.”

The collectors are manufactured at the Chromasun facility in San Jose, California. By achieving a concentration of 25 times the sun, the collector can generate temperatures of 220 ° C at 40 bar. The entire optical system is enclosed within a sealed canopy to protect it against the elements. The MCT has no external moving parts and is mounted on the same racking systems as conventional flat plate collectors. So far, Chromasun has realised beta test installations in Los Angeles, San Jose and New York (all three USA), Munich (Germany), Bangalore (India), Sydney and Canberra (both Australia) . The first commercial project is the one in Santa Clara, the second project is under construction in Abu Dhabi.