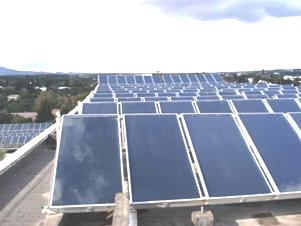 The “Collective Prosol Programme” in Tunisia is gaining momentum. The National Agency for Energy Conservation (ANME) started the subsidy programme for solar thermal installations in the tertiary sector back in 2008. The application rate was low at first, but 2010 became a good year for the commercial solar thermal market. At the end of that year, ANME counted a total installed and subsidised collector area of 4,000 m2, including four hotel installations with together 480 m2 and around 130 smaller installations under 30 m2. According to ANME, grants for another 1,770 m2 are still in the pipeline. And, a solar programme targeting 18 public swimming pools is also under development. The photo shows the solar installation on the Iberostar Phenicia hotel in Hammamet, at the northeast coast of Tunisia.
Photo: Alcor

The success of the residential PROSOL programme has paved the way for developing a second scheme to set up solar water heaters in the commercial sector, mainly at hotels, hammams (Turkish baths) and multi-family houses.

ANME designed the financial scheme in cooperation with the United Nations Environment Programme (UNEP) in 2008. All subsidies are completely incorporated into it, which means the beneficiary pays the investment costs after deducting the subsidy. The programme offers the following grants:

The programme had aimed at the installation of 60,000 m2 of collector area in the tertiary sector between 2008 and 2011, including 80 hotels with a total surface of 16,000 m2. This aim will have been missed by far at the end of 2011. In addition to the difficult economic situation in the hotel sector, the main reasons for missing the target figure are:

The Collective PROSOL programme has also benefited from the support of the German Agency for International Cooperation (GIZ) in terms of technical assistance and capacity-building. The agency has trained the personnel of engineering consulting firms, as well as fitters and hotel operators, and has prepared installation service providers for how to realise their first system.

In addition, ANME has issued a list of engineering companies and solar thermal system providers eligible to design and install the solar water heating systems. It shows:

This news was written by Ghazi Ben Salem, Engineer and energy expert at Tunisian consultancy Alcor, based in Tunis (http://www.alcor.com.tn).