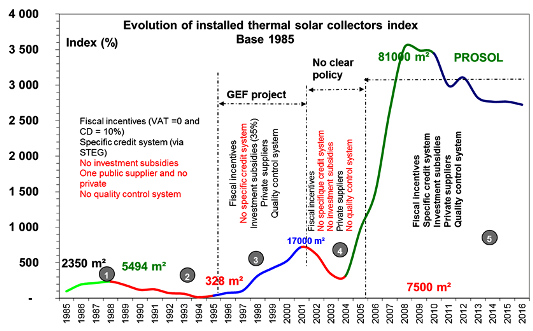 Tunisia`s solar thermal market stabilised at 64,000 m2 in 2016, a figure only slightly lower than the 65,000 m2 in 2015 and in 2014, but significantly below the peak years of 2008 to 2010. The key market driver had again been Prosol, the national residential programme launched in 2005 and based on a financial scheme combining direct subsidies of Tunisian Dinar (TND) 200 and 300 granted by the Energy Transition Fund and low-interest loans. With 90 %, residential systems still account for the largest share in newly installed collector area. However, hotels and commercial buildings have profited from Prosol Tertiary since 2009 and contributed around 5 %.
Graphic: Alcor
Based on data from the National Agency for Energy Concervation, ANME,  3,738 m2 of collector area were installed in tertiary-sector buildings (hotels, municipal swimming pools, students´ accommodation, etc.) in 2016 of which 1,900 were subsidised within Prosol – compared to 2,000 m2 installed the year prior and 3,305 m2 in 2014. Prosol tertiary programme supports the feasibility studies for solar thermal systems with 70 % of the costs capped at 30,000 EUR and subsidises the investment costs with 30 % capped at 70 EUR/m2 from the Energy Transition Fund, FTE, in addition to a 25 % grants of the system investment costs with a cap at 70 EUR/m2. Besides, a bonus of 2 % is awarded on the interest rate of the loan to finance the solar investment from Italian cooperation fund and UNEP support.
Credit lines should kept in place
There have been debates about Prosol’s future for almost two years and they have recently led to its extension until 2020. “The big bottleneck is the high upfront cost of solar water heaters for residential and commercial clients,” explained Rafik Missaoui, Alcor’s Managing Director. “We recommended that the credit line be kept in place and the subsidies for residential projects be phased out progressively, but that the subsidy for tertiary buildings be left intact.”
ANME has invited banks to tender for credit line programmes until 2020. Tunisia’s energy ministry through the Tunisian Company of Electricity and Gas, STEG, allocated a budget of about TND 120 million (around EUR 49 million).
Prosol’s current programme phase will end in June 2017. Grants will initially remain at the level they are now and owners of systems from all three sectors – residential, industrial and service – will again be eligible for them. Possible residential grant reductions and increases in the industrial and service sector will be announced later.
Delayed commissioning of first industrial solar heat demonstration plant
Prosol Industry was launched in 2010 and has received financial support from the Italian environment ministry and the United Nations Environment Programme. A first demonstration plant supported by Prosol Industry subsidies was installed at Benetton’s textile factory in the coastal town of Sousse in 2016. The 1,000 m2 flat plate collector field was set up by Italian-Tunisian solar thermal system supplier EDS (Energie del Sole). However, technical problems with the steel storage tanks have postponed the commissioning of the plant.
“The project is in his final step. The project partners have a strong commitment to finalise the solar plant this year,” explained Baccouche Abdelkader, head of the solar department at ANME. “The success of this demonstration project help the ANME to duplicate the experience to other industries and reach the national goal of 14000 m2 of solar process heat installions by 2020.” Prosol had subsidised 70 % of the planning, hardware and installation costs of this first solar process heat system in Tunisia, but funding ultimately came from the Italian-Tunisian partnership and UNEP.
“We focused on low-temperature process heat to be able to use technically mature technologies and reduce system complexity,” explained Abdelkader. “Solar process heat applications should concentrate on replacing LPG and fuel oil to decrease payback times.” ANME estimates a technical potential of 400,000 m2 for solar heat in industrial processes (SHIP) – 60,000 m2 in a temperature range of up to 90 °C and 340,000 m2 for delivering temperatures of between 90 and 250 °C.
Websites of organisations mentioned in this article:
http://www.energiedelsole.com/demo/
http://www.anme.nat.tn/index.php?id=3
http://www.alcor.com.tn/