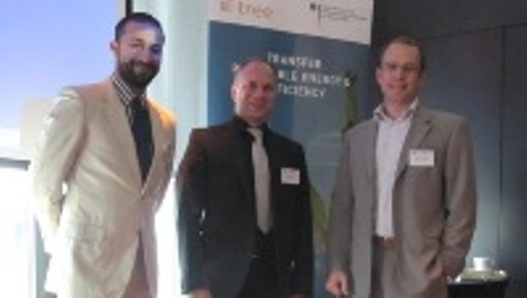 As part of the Transfer Renewable Energy & Efficiency (TREE) project, the German Renewables Academy (RENAC) has two seminars on renewable energies, including solar thermal, in November. The first took place in Abu Dhabi, United Arab Emirates (UAE), on 7 and 8 November, with the speakers shown on the photo above. The second will take place in Johannesburg, South Africa, on 24 and 25 November. At the second event, Frank Schillig from German engineering consultancy KWA EVIVA GmbH will cover solar thermal technology, and Volker Jaensch from RENAC will do the same for wind energy.

“The aim of the seminars is to impart key stakeholders with the relevant knowledge for the rapid expansion of clean energy,” Renac explains in a press release. For example, the UAE aims at producing 7% of electricity from renewable energy sources by 2020. The seminar fee is subsidised within the framework of the TREE project. However, only 16 participants followed the invitation to Abu Dhabi, which was not really satisfying from the event organisers’ point of view.

Nevertheless, there was high interest in solar thermal applications, Jakob confirmed: “The participants had a lot of questions regarding the performance of the different technologies and the cost-effectiveness of the systems”. The discussions then turned to the frame conditions in the Middle East. “Basically, the cost of electricity in the UAE and neighbouring countries is very low, which means that, currently, payback times are still very long,” explains Jakob. According to an article in UAE newspaper The National, electricity in Abu Dhabi is currently priced at 0.04 US$/kWh for expatriates and just over 0.01 US$/kWh for Emiratis.

In South Africa, the conditions for solar heating and cooling seem to be better. Renac has already received registrations by 55 participants for the seminar in Johannesburg. Altogether, more than 600 participants from various ministries, research institutions, companies and NGOs have so far participated in the TREE project, which started in 2008 by focusing on capacity building and knowledge transfer in and to developing and emerging countries. The German Academy says it will continue the project next year, but with a different target group.