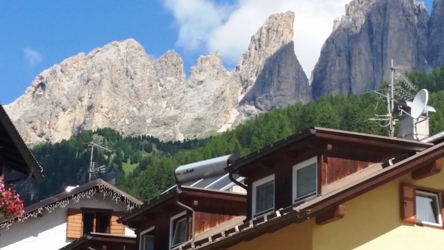 System suppliers and importers in Italy have reported significant growth in thermosiphon sales in 2017 thanks to the national support scheme Conto Termico 2.0. “Compared to the previous year, we more than doubled the number of thermosiphon units we sold in Italy in 2017, and most systems had a larger collector area because of the level of subsidies from Conto Termico 2.0,” said Export Sales Manager Andreas Andrianopoulos from Greek-based solar thermal manufacturer Cosmosolar.
Photo: Riccardo Battisti
Sergio D’Alessandris from Idaltermo said: “Our sales of thermosiphon systems in 2017 showed an increase of 30 % compared to our internal forecast.” He added that the positive development could partly be a result of the growing rate of replacements and retrofits of old solar thermal systems. “People who have chosen a solar water heater once will never go back to fossil fuels,” he said.
Marcello Fratini, Leader Product Manager Systems at Ariston Thermo, a large Italian manufacturer, reported a 20 % increase in thermosiphon system sales in 2017 compared to the prior year. “The Conto Termico 2.0 incentive,” Fratini said, “is not directly linked to the investment and, therefore, definitely more appealing to buyers of cheaper systems.” He added: “Furthermore, installers or engineering companies take care of the incentive application on behalf of consumers and, therefore, the process is very straightforward.” With Conto Termico 2.0, installation companies have the option to apply for the subsidy themselves and sell the system at a lower price to consumers.
Mario Giannelli from CMG Solari, located in the far south of Italy, affirmed that Conto Termico had a key role in driving the market: “Users are really satisfied with the incentive being paid in just one year, up to a threshold of EUR 5,000. This is a much better solution for the installation of small and cheap systems than the tax reduction, which is being utilised more in building renovation measures, usually with more relevant investment amounts and mainly in the north of the country.” Asked about the situation on the thermosiphon market, Giannelli said that the aggregated supplier data provided by members of the Assotermica association showed a stabilisation in 2017, with sales trending slightly upwards.
Incentives: Two are better than one
The increase in the number of thermosiphon systems, as reported by some businesses operating on the Italian market, can also be linked to the availability of two parallel support schemes from which potential customers can choose. The first one, called Ecobonus, is quite well-known among installers and offers a tax reduction corresponding to 65 % of the investment, to be recovered within a 10-year period.
As an alternative, Conto Termico 2.0 provides about 30 % of the investment cost in just 1 year, even though the exact amount depends on system size, application and expected collector yield (as has already been reported here).
Websites of organisations mentioned in this article:
DIMAS: http://www.dimas-solar.gr
Idaltermo: http://www.idaltermo.it
Ariston Thermo: http://www.aristonthermo.com
CMG Solari: http://www.cmgsolari.it
Tax reduction (Ecobonus): http://www.acs.enea.it
Conto Termico 2.0: http://www.gse.it/servizi-per-te/efficienza-energetica/conto-termico