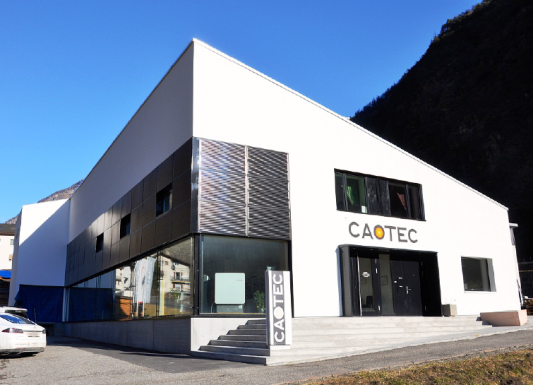 The Swiss-based SPF – Institute of Solar Technology has recently published a report on behalf of EnergieSchweiz, a programme by the Swiss Federal Office of Energy, about the market situation of PV-thermal technologies (PVT) in Switzerland and across all of Europe (see attached document in German). The researchers from SPF have found that there are various market-ready and proven products available. They counted around 300 PVT installations in Switzerland alone. A particularly good example is shown on the photo: a PVT installation integrated into the facade of an office building.
Photo: Caotec
“The PVT market has gained momentum in recent years,” the authors write. In a non-exhaustive survey SPF identified 53 PVT manufacturers in 17 countries. They attribute the positive development of the market to reduced PV costs and attractive system solutions combining PVT technology and heat pumps. Nearly two-thirds of the manufacturers come from Central Europe, including ten from Germany, eight from Italy and five each from France and Switzerland. Half of the businesses from those countries have obtained a Solar Keymark certificate for at least one of their PVT collectors.
Industry dominated by cost-effective unglazed liquid-based collectors
SPF put products into one of three categories: Liquid-based PVT collectors divided into ones with and without glass cover and PVT units using air for heat transfer (typically not covered). With 38 products, unglazed water-based collectors are by far the most common solution and the only type manufactured by the five Swiss companies listed in the study. Most models of this type are market-ready and proven products, the SPF scientists conclude. Their efficient use is limited to low-temperature applications, but their stagnation temperature (below around 90 °C for products without backside heat insulation) has the advantage of reducing the thermal stress on materials. The collectors are relatively cost-effective.
Usually, unglazed PVT collectors in central Switzerland produce an annual electric yield of about 160 kWh/m². The thermal yield depends greatly on the application, ranging from 150 kWh/m² and year for domestic water heating and 250 kWh/m²a for water pre-heating to 300 to 400 kWh/m²a for heat pump combinations, such as the ones to regenerate boreholes or preheat ground water for heat pump use. The cooling effect that heat usage has on electric yields varies by operating temperature (see the figure below for more information). Low-temperature applications typically show a 5 % increase in annual electricity yield compared to standard PV systems.

Polysun-simulated annual production of heat (solid fill) and electricity (hatched columns) by PVT collector types with liquid heat transfer fluids. The percentage indicates the difference in yield compared to common rear-ventilated PV panels.
Source: SPF
Covered PVT collectors with liquid heat transfer fluids can be used efficiently for higher-temperature applications such as direct domestic water heating. However, their greater stagnation temperatures (around 150 °C) require the use of special materials for PV encapsulation and special glues or, alternatively, measures at system level to prevent stagnation. This makes the product more complex.
PVT collectors which use air as the heat transfer fluid usually consist of standard PV modules combined with an air ventilation unit. Most of these systems are open in the sense that they heat up the surrounding air, as opposed to systems with air circulating in a closed loop. In general, the warm air is utilised directly for low-temperature applications, such as space heating or drying. However, there has also been a growing interest in systems which use it as the source of an air-water heat pump.
Test procedures need to be standardised
SPF said that there were considerable differences in the quality and completeness of product data sheets. Whereas electrical properties had overall been established based on Standard Test Conditions, thermal output figures provided by manufacturers might refer to differing boundary conditions (e.g., with or without simultaneous electricity generation), and sometimes these boundary conditions are not even mentioned in the test reports. This made comparing PVT products somewhat cumbersome.
Since 2015, the rules on Solar Keymark approval have stipulated that PVT modules must be measured while having PV power generation on simultaneously and operating the system at maximum output. Still, PVT collector tests need further standardisation and test procedures known from the solar thermal and PV market need to be adapted to meet the requirements of PVT.
Switzerland’s PVT market
In Switzerland, there are currently about 300 plants with unglazed PVT collectors totalling 15,000 m². SPF estimates new installations to be at around 3,000 m² per year, in contrast to 100,000 m² of thermal collectors and 2,200,000 m² of PV panels. Typical applications are heating and preheating domestic hot water (about 30 % of plant total), space heating (around 15 %) and various combinations with heat pump systems, with systems for borehole regeneration being the most prevalent ones at about 30 %. Seven large-scale PVT plants of between 50 and 3,500 m² of collector area were built during pilot or demonstration projects financially supported by the Federal Office of Energy. These plants have all been equipped with comprehensive monitoring systems and their performance has been analysed and documented by the scientific partners.
In addition to interviews with several PVT manufacturers, there was a detailed survey among Swiss distributors, planners and installers operating on the solar market. Of the around 600 companies contacted for the survey, about 20 % have been involved in the realisation of at least one PVT plant, whereas 80 % indicated having no experience with PVT. Most companies showed a rather positive attitude towards PVT technology. The interviewed companies saw particular challenges for broader deployment of PVT technology to be cost reduction, knowledge transfer, technological awareness and design enhancements.
Websites of organisations mentioned in this news article:
SPF Rapperswil: http://www.spf.ch
EnergieSchweiz: http://www.energieschweiz.ch
Swiss Federal Office of Energy (Cleantech): http://www.bfe.admin.ch/cleantech/
https://solarthermalworld.org/wp-content/uploads/2017/06/pvt_switzerland_final.pdf