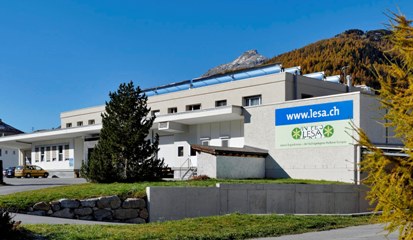 ewz’s latest solar project as an energy service company (ESCO) is the solar plant at dairy company Lataria Engiadinaisa SA (LESA), which is located at an altitude of 1,700 m in the Swiss Alps. With its 115 m² of parabolic trough collectors by NEP Solar, the solar plant heats thermo-oil up to a temperature of 180 °C in order to provide heat for steam production. The investment of Swiss Franc (CHF) 500,000 was jointly financed by the Swiss Federal Office of Energy and ewz. The heat is sold to LESA at the same full cost as steam production by the dairy´s installed oil boiler. The project won the Swiss Solar Prize in 2012.
Photo: ewz
Founded in 1890 as an electricity company, ewz began to finance, install and operate heating and cooling plants as an energy service company in 2002. From 2015 on, Zurich’s energy services division will be obligated to use 50 % carbon-neutral energy sources every time it increases ESCO capacities. Solar thermal heat is still the exception, mainly because of the associated costs. In addition to the LESA project, ewz operates a solar thermal plant of 650 m² of flat plate collectors at Milandia Greifensee in Zurich, a spa and fitness centre run by the Migros cooperative.
Solar collector field designed to cope with intense snowfall
The LESA plant is designed to deliver 60 MWh of usable energy per year, saving 70 MWh of oil annually. Whereas temperature and maximum output were achieved as scheduled during the first years in operation, the solar yield of 46.3 MWh between July 2012 and June 2013 was 30 % lower than expected, mostly due to bad weather conditions: Direct irradiation was 9 % lower than historical data showed and there was a lot of snowfall in winter. Usually, this wouldn’t create any difficulties: When there is not enough sunlight for heat production, the trough collectors remain in their safety position, facing downwards. They can later turn back into their working position even after heavy snowfall because the collectors are mounted on a stand made of concrete. “Last winter, there was so much snow that the collectors could not turn back up again,” Mevina Feuerstein, responsible for special and innovative ESCO projects at ewz, says. In addition, about 1.5 MWh of heat could not be used due to a defective pipeline.
ewz measures temperatures and pressures and monitors valves and pumps across its part of the heating network. It can also watch the collector field via webcam. The system is fully automated, but if necessary, ewz can access the plant from Zurich. Once or twice a year, ewz cleans the system manually with water and a soft cloth. Technical personnel from LESA carries out a daily inspection of the transfer station.
Solar thermal plays small role in ewz’s ESCO business
“As each project has to use a minimum of 50 % of carbon-neutral energy, solar is rather the exception to the rule. Currently, we are evaluating solar heat as an option to regenerate geothermal probes and install an ice storage with solar regeneration as a heat source for a multi-family building,” Feuerstein says. Depending on the application, ewz looks at different CO2-free energy sources which could produce the required energy.
ewz was founded in 1890 to supply Zurich with electricity. Today, it has 1,100 employees. Fifty of them are working on ESCO projects, which sell 188 MWh of heating and cooling energy per year. The company owns a 10 % share in the 30 MWel Puerto Errado solar thermal power plant in Spain.
More information:
ewz: http://www.ewz.ch
LESA: http://www.lesa.ch
NEP: http://www.nep-solar.com
Spa and fitness centre Milandia Greifensee: http://www.fitnesspark.ch/milandia/