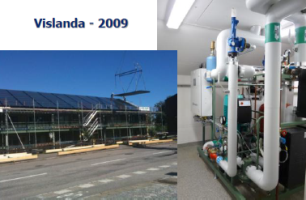 Decentralised solar heating plant: The energy from the collector field on the roof of the building can either be used to cover the heating demand of the building or it can be fed into the district heating network.
Figure: Chalmers University of Technology

The advantages of the system: The collector field can be designed based on available space on the roof and dimensions of the district heating branch on site, and not on the actual load of the specific building. Second: The solar heat can be put to optimal use without overheating in summer. Third: A third party investment is possible, too. The solar investment can be made by the housing facility owner, by a specific plant owner (ESCO) or the utility.

According to Dalenbäck, several collector systems in Sweden and Austria have already been used as net metering systems. In this context, the Swedish researcher also referred to a report drafted in the framework of the European project “Solar District Heating”, which will be published later in January.