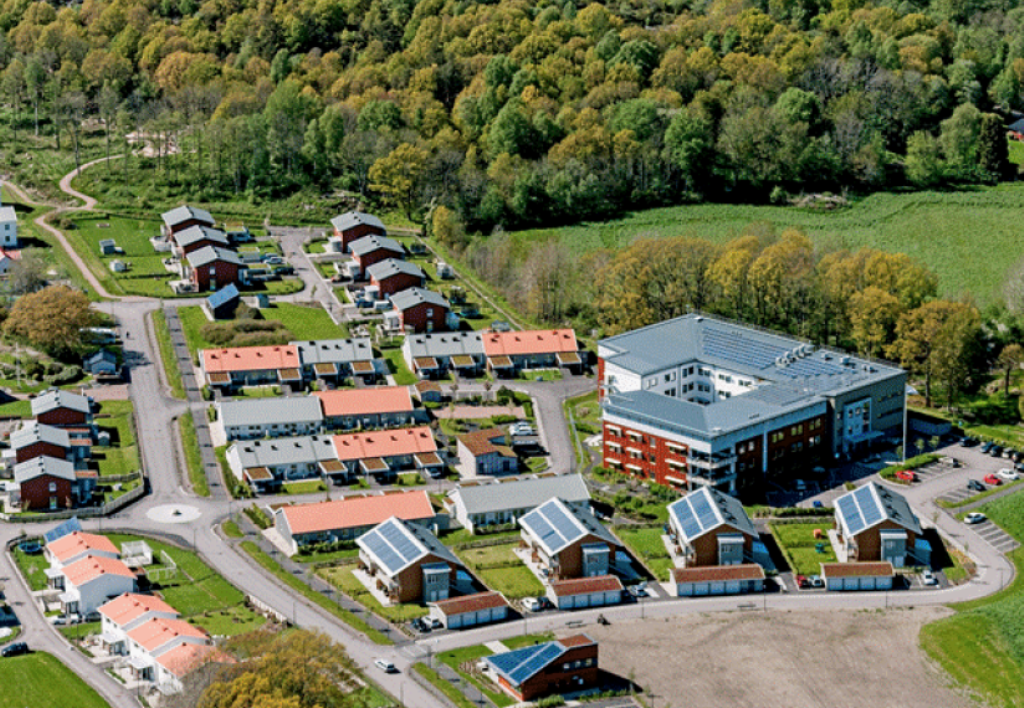 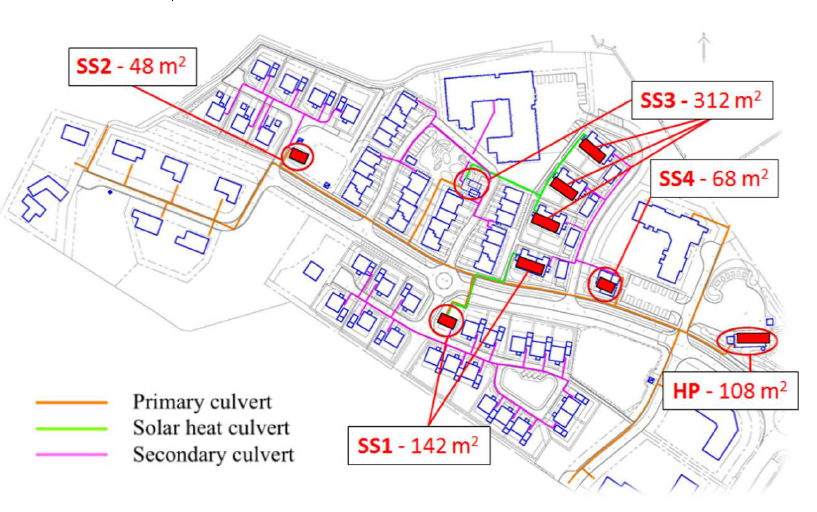 Researchers working for the IEA Solar Heating and Cooling programme have created a list of urban solar heat projects that not only met but exceeded the ambitious aims set for them initially: Seven best-practice examples and two scoping studies of systems in Austria, Denmark, Germany, Sweden and Switzerland became part of a June 2018 report titled IEA SHC Task 52: Technology and Demonstrators (see the attached document). All nine case studies were based on comprehensive questionnaires enquiring about technical, administrative and planning issues. This news article will focus on Vallda Heberg (see photo), a housing area in Kungsbacka, in southern Sweden. It boasts a solar fraction of 40 % despite a lack of seasonal storage (see p. 41 of the report attached to this article).
Photo: Eksta Bostads AB
Built between 2011 and 2016, Vallda Heberg is, in many respects, an exemplary project. The houses constructed at that time are not only well insulated but also heated by a system that includes 570 m² of flat plate collectors and 108 m² of evacuated tube collectors. While much of the energy is sourced from biomass, the solar components provide enough to meet about 40 % of the annual heat demand from all households on site. The total floor area of the housing estate is around 14,000 m².
The main driver behind this innovative concept was property management firm Eksta Bostads, which is owned by the town of Kungsbacka. Its aim was to prevent the installation of electric heaters, which are often used to meet the low energy requirements of passive houses. However, they also put more strain on the country’s electrical grid. “It is difficult to determine the optimal solution for low-energy houses with airtight building envelopes. What we do know is that considerable attention needs to be given to load balance and detailed planning,” explained Jan-Olof Dalenbäck, a professor at Swedish-based Chalmers University of Technology and one of the authors of the Vallda Heberg case study.
According to the study’s authors, other challenging issues were:

Illustration of the heat network in Vallda Heberg. SS stands for substation and HP for (central) heating plant.
Source: 2014 Master’s thesis by Olsson and Rosander
Progress was made by drawing up a new and complex energy distribution system, where solar heat is injected into the district heating network in two steps: The primary heating loop consists of conventional steel pipes connecting the centre to four substations, while secondary loops running between these substations and all households are made of low-cost PEX (crosslinked polyethylene). Decentralised fields of flat plate collectors installed at each substation preheat water for domestic use, whereas vacuum tube collectors put up on the roof of the heating centre at a large tilt angle of 70° improve solar fractions in autumn and winter.
When asked, the researchers said that the main lessons learned from this project were:
Organisations mentioned in this article:
http://www.iea-shc.org
http://task52.iea-shc.org/
https://solarthermalworld.org/wp-content/uploads/2019/08/iea-shc_task_52_stc2-best_practice_summary_report_june_2018_final.pdf