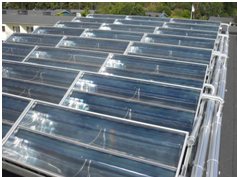 In Sweden, it is not uncommon to feed solar heat into district heating networks. “After a bit of persuasion, most district heating companies will agree to buy the heat, but the prices they pay for it will differ a lot,” Gunnar Lennermo says. Lennermo works as a consultant for Energianalys and helps his customers with planning and constructing large solar installations.
Source: Energianalys

One of Lennermo’s customers – housing company Förbo  – is currently building a flat block for 39 families in the town of Lerum. The building will be equipped with 192 collectors, totalling 420 m2. The model of the chosen collector is called CPC-T 1500 W and is a product of Swedish company Solarus. According to Lennermo’s calculations, all collectors combined will produce more than 120 MWh of heat per year – more than the flat block requires. Instead of building a big seasonal storage, the surplus heat will be sold to district heating company Lerum Fjärrvärme. The company has agreed to pay as much money for the solar heat as they would have for other heat sources, which is around 25 €/MWh. Like all tariffs for solar heat, this tariff is based entirely on a negotiated contract between the operator of the solar system and the owner of the district heating system.

Some tariffs for solar heat in Sweden are even higher, but others are also lower. For example, most of the heat in Karlstad is generated by the incineration of waste. This makes for very low heat costs, which is why the operator of the district heating has no interest at all in solar heat. Still, there are some solar plants which feed heat into a grid. “There is a plant that has been mounted on a sports arena. With a collector area of 160 m2, it is definitely oversized,” says Lennermo. In summer, when all tanks are completely filled, excess heat is fed into the grid – but for free. “We do this to avoid overheating the system,” Lennermo explains. As many feed-in systems, this one uses a collector by Aquasol and a standardised heat exchanger unit by Swedish company Armatec.

In contrast, the town of Norrtälje, which is located about 70 km north-east of Stockholm, offers a tariff which could prove more successful to promote solar heating. In April, the housing owner’s association BRF Hadi set up a solar system on their flat block which has 96 solar collectors of the same type as the system in Lerum and also the same type of heat exchanger. The solar system is expected to produce 60 MWhth per year.

The BRF Hadi solar system has no storage tank. Solar heat is fed directly into the grid. Norrtälje Energi has agreed to buy the solar heat for the same price at which they sell heat to their customers. The only requirement was that the customer purchases at least the same amount of energy which he feeds into the grid. In summer, when the customer’s solar heat production exceeds his heat purchase, Norrtälje Energi pays less. For example, if the customer produces 13 MWh of solar energy in one month and buys 10 MWh, Norrtälje Energi will pay the full price for the first 10 MWh. In case of the remaining 3 MWh, the company will pay only the fuel cost it saves by not having to run a wood chip boiler, which is about one third of the sales price. “It is the best agreement I have seen so far,” Lennermo says.

As an ideal tariff model, Lennermo would envisage selling heat of up to the monthly purchased amount for 90 to 95 % of the purchase price, and the excess amount for 50 % of it. “Usually, there are only one or two months per year during which sales exceed heat purchase,” the consultant explains. But he knows that the grid-operating companies do not always seem to be much interested in buying solar heat. “Many of them do it rather out of customer loyalty than out of interest in solar energy,” Lennermo says.

Jan-Olof Dalenbäck, Secretary of the Solar Energy Association of Sweden, estimates that there are about 20 solar systems with collector areas from 75 to more than 1,000 m2 which sell their solar heat to around ten district heating companies all over Sweden. He considers 80 to 90 % of the price of district heating to be a common price for solar heat. According to Lennermo, district heating prices range from around 10 €/MWh in summer for a big commercial customer (excl. VAT) to around 70 €/MWh for a small customer in winter (including VAT). 40 to 50 €/MWh could be viewed as typical.

The pioneer project for feeding solar heat into district heating networks was built in Malmö in 2001 during the European Building Exhibition. In the meantime, grid operator Sydkraft has been bought by German utility company Eon and renamed to Eon Sverige. It has become Sweden’s second largest utility. Eon Sverige runs many district heating networks all over Sweden. It usually buys solar heat for 75 % of the sales price of heat and accepts temperatures of 65 °C and higher.

It seems as if the subsidiary has shared its good experiences with solar heat with other members of the utility group: In the German city of Hamburg, Eon Hanse Wärme has just published a business model to integrate decentralised solar heat into their district heating system.