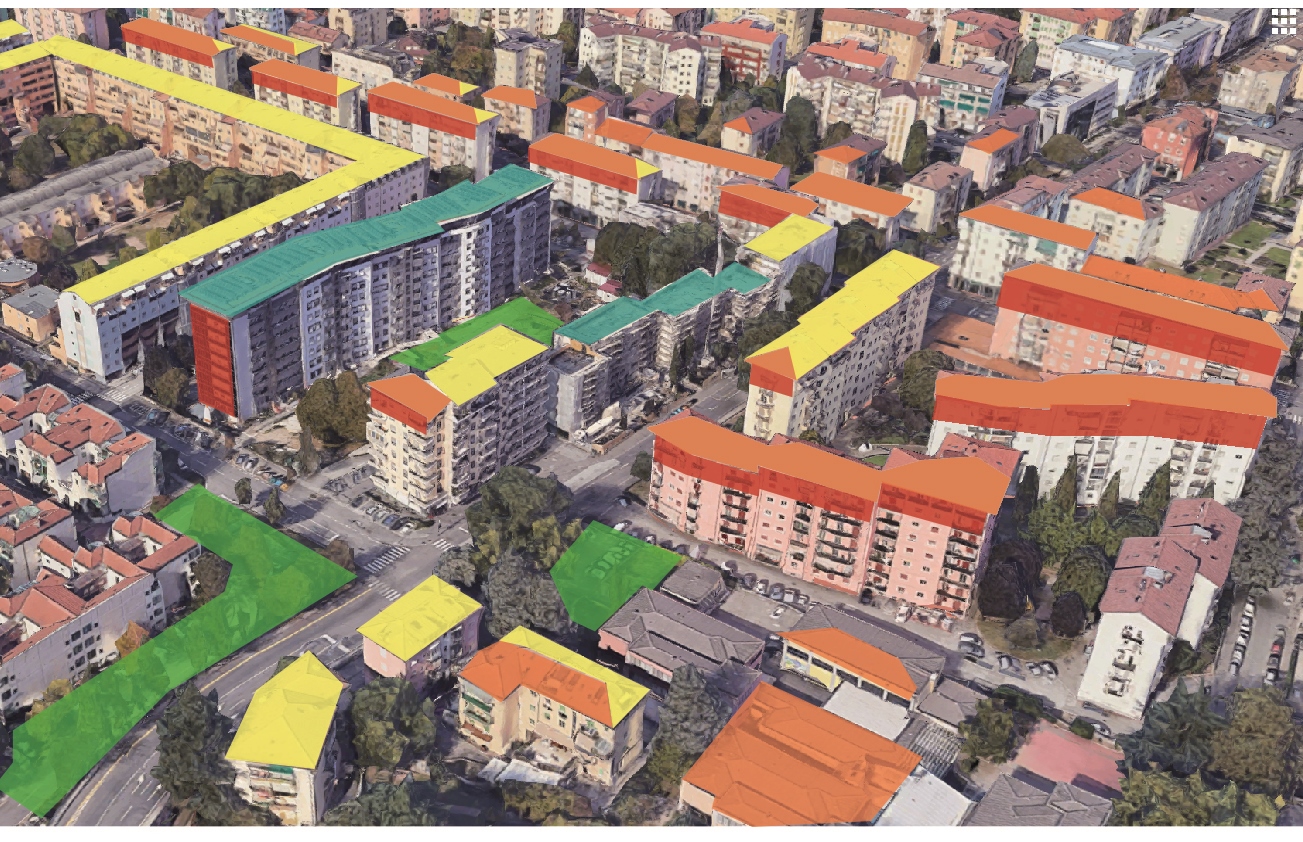 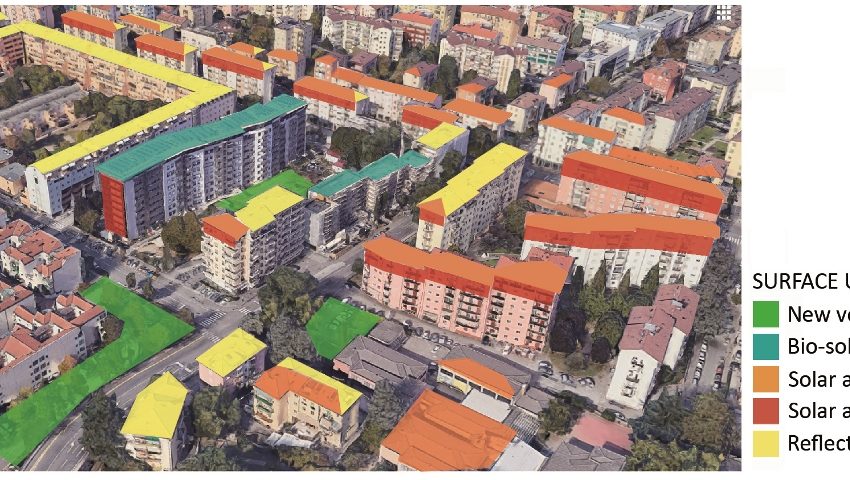 Surface area is an important but limited resource in cities that aim to become climate neutral. It can be used to, for example, generate heat or electricity via active solar systems, improve air quality via greening, or provide cooling thanks to highly reflective and emissive materials. Scientists at Italian institute Eurac have now developed a multi-factor approach to study the synergies and conflicts that arise from using ground, facade and roof space in urban communities. Their work plays a key role in global research platform Solar Neighbourhood Planning, also known as IEA SHC Task 63, which is part of the IEA Solar Heating and Cooling Programme. In addition, they have put their approach to the test by analysing a residential area in Bolzano, Italy (see photo).
Image: Eurac Research

“We see urban surfaces, such as streets, facades and roofs, as key elements in the planning process of, for example, Positive Energy Districts. But we have observed that the usual approach these days is to focus only on one type of use,” explained Silvia Croce, a researcher at Eurac and the co-leader of the Economic Strategies and Stakeholder Engagement working group within IEA SHC Task 63 (the other co-leader being Daniele Vettorato). The potential of facades in particular has been underestimated, as their surface area makes up nearly 50 % of the total in residential neighbourhoods. The Bolzano case study has shown that 46 % of urban surfaces are facades, 41 % ground area and just 13 % rooftops. It should be noted, however, that the distribution in one of Bolzano’s industrial areas, which was also part of the study, is slightly different. Here, ground surface contributes 39 % to the total, facades 31 % and roofs 30 %.

Six different ways to use an urban surface to provide sustainability across cities
Source: Eurac Research

Following discussions within the IEA SHC Task 63 research group, she then created a matrix table that shows the synergies and conflicts in each of the main categories (see the chart below for an excerpt of this table). “From observing several smaller demonstration systems, we know that bio-solar roofs can be installed where vegetation is planted below a mounting system for either solar thermal collectors or PV modules,” Croce said about the (green) check marks in the table. Eurac also considered discussions about aquavoltaics – floating PV panels that cover fish-breeding ponds – and productive facades, which combine PV modules into a shading system for farm-grown plants. However, these approaches have yet to be developed beyond very early predesign.

Synergies and conflicts arising from the installation of solar energy systems and other sustainable methods that use urban surface area.
Source: Eurac Research

As a third step, she tested her multi-factor approach at a neighbourhood in Bolzano. The district she chose is one of five areas across the city that participated in the Smart Cities European project SINFONIA (Smart Initiative of cities Fully cOmmitted to iNvest In Advanced large-scaled energy solutions). It includes two social housing blocks of flats and the buildings nearby.

“We created a 3D model to identify building surfaces providing higher annual irradiation (850 kWh/m2 and above), as those are suitable for installing solar active systems,” Croce explained. Because of the multiple factors involved in generating results, the following measures were combined and simulated (see the photo at the top of this article).

New vegetation stretching over an area of about 4,000 m2 was included at ground level, while the two social housing blocks of flats saw the installation of bio-solar roofs for greening and energy production. Active solar systems were then added to surfaces with suitable solar potential, and the remaining roof surface was covered with reflective paint or tiles.

Croce summed up the benefits of these comprehensive measures as follows:

Within the next years, in the framework of IEA Task 63, the multi-criteria approach to evaluate alternative scenarios for urban surface usage will be further developed. Moreover, multiple benefits created by the adoption of the integrated strategies will be investigated as well.