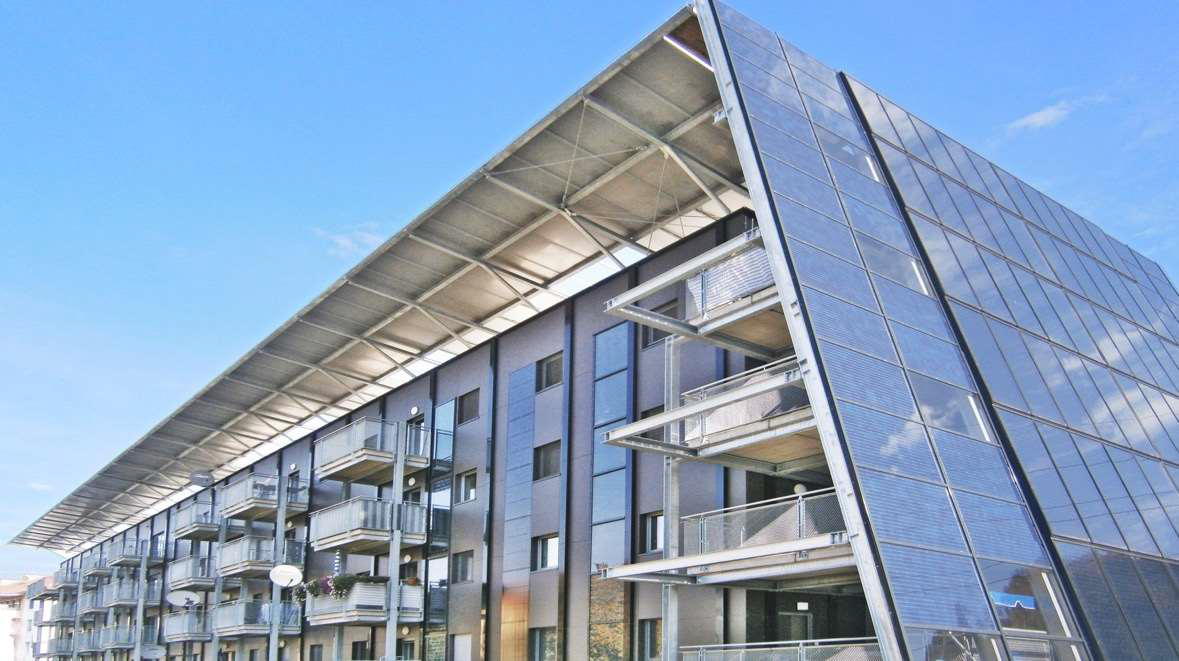 A facade to capture solar energy is a particularly appealing option if a solar thermal system is to be integrated into an office or a multi-family building, as the available roof area is often relatively small compared to how much floor space needs to be heated or cooled. An international research group set up as part of IEA SHC Task 56 has now created a report called Design Guidelines to help architects and planners evaluate and optimise Building Integrated Solar Energy Systems (BISES). The research was coordinated by Fabian Ochs, who works at the University of Innsbruck in Austria, and led to the publication of the report this June (see the attached document).
Photo: AEE INTEC
The benefits of using advanced solar facades to generate electricity or heat or to harvest daylight have been hard to quantify, as it has often been difficult to assess how the facade interacts with a building’s indoor environment and energy management systems. To shed some light on the issue, Fabian Ochs and his Task 56 research team analysed the technical and economic factors that influence the viability of different facade solutions. They then used their findings to develop key performance indicators to help evaluate and optimise nearly zero energy buildings and achieve maximum primary energy savings at cost-optimal levels.

A modelled office building (left) made up of several standardised office units (right)
Chart: University of Innsbruck
Standardised office units
The group conducted virtual case studies of non-residential building projects based on a standardised office unit with one window, 27 m2 of floor space and a volume of 81 m3 specified by Eurac Research, Italy. This office box was implemented in multiple simulation tools. All simulations were carried out at three locations (Rome, Stuttgart and Stockholm) by using one of several energy-saving technologies, for example, systems comprising PV facades and heat pumps, facade collectors, and PVT units preheating ambient air. “The standardised box model has been made publicly available online, so it can be used by other researchers and planners,” said Ochs. “It has helped us simulate larger buildings consisting of several units.”
A comprehensive description of the virtual case studies, system variants and results can be found in a 187-page report titled System Simulation Results (attached to this news article). There is also the above mentioned shorter 49-page document called Design Guidelines, which explains to practitioners the methodology used by the researchers and some of the findings from the longer version.
Optimised 20-year life cycle costs
The Task 56 members analysed, among others, how the quality of the building envelope, the HVAC configuration and the control strategy, such as advanced daylighting, affected primary energy and cost savings in regard to office buildings. They used life-cycle costs (LCC) to compare variants installed in newbuilds and in renovated structures by following EU recommendations for nearly zero energy buildings. “The reality, however, is that decisions concerning the building envelope are still frequently taken based on how you can keep investment costs to a minimum. By contrast, the LCC method shows the most cost-effective solution considering both the initial investment and the running costs of a solution over 20 years,” said Ochs.

Lines showing the smallest difference in life-cycle costs per non-renewable primary energy unit and HVAC configuration at office buildings in Stockholm (Sto), Stuttgart (Stu) and Rome. LCC includes investment, maintenance and operation over a 20-year period. HP stands for heat pump and DE for direct electric.
Chart: University of Innsbruck
All lines in the graph have a relatively flat base and the most cost-effective, non-renewable primary energy level is between 135 and 145 kWh/m² and year. The results depend on the climate, with the lowest difference in LCC found in Rome and the highest for Stockholm.
In Stockholm, a good-quality envelope and a heat pump will make for a cost-optimal solution with an non-renewable primary energy demand at about 140 kWh/m²a. In Stuttgart, optimal results can be achieved via fluorescent lighting, a building envelope of high or excellent quality and electric heating. If LEDs are to be used, combining them with a heat pump will cut costs more than other, similar solutions and reach the lowest LLCs of all of them. Similarly, building-integrated PV can reduce primary energy demand from office buildings to as little as 80 kWh/m2a. However, given current situations, incentives will be required to make this technology economically viable in central and northern Europe.
In Rome, the envelope quality has little impact on primary energy savings. Still, facade-integrated PV systems are close to economic viability, as they can cut primary energy demand to a record low of 75 kWh/m²a.
The reports described in this article, i.e., System Simulation Results and Design Guidelines, were not the only deliverables of IEA SHC Task 56, Building Integrated Solar Envelope Systems for HVAC and Lighting, which ended in January 2020. Visit the Task 56 website if you want to learn more about its work or download the reports and tools used by the research group: https://task56.iea-shc.org/.
Other solarthermalworld.org news articles on Task 56 can be found in the following:
SWOT analysis of building-integrated solar systems
“Facade-integrated HVAC components pose a Challenge for all parties involved”
Building-integrated solar envelopes: barriers to deployment
Cooperation on Energy Balance and Building Design Tools
Kick-Off Meeting on Building Integrated Solar
Organisations mentioned in this article:
http://www.iea-shc.org
https://task56.iea-shc.org/
http://www.uibk.ac.at
https://solarthermalworld.org/wp-content/uploads/2020/06/task56-dc3-design-guidelines.pdf
https://solarthermalworld.org/wp-content/uploads/2020/06/task56-dc2-system-simulation-results.pdf