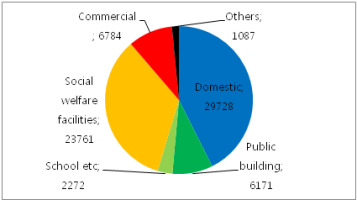 The commercial solar thermal market is gaining importance in South Korea. According to the Korea New and Renewable Energy Center (KNREC), only 43 % of the glazed and subsidised collector area in 2010 was installed in residential housing. The majority of systems were set up in public buildings because of a mandatory renewable law, and in social welfare facilities due to a 50 % investment subsidy. The KNREC pie chart of the collector market in 2010 adds up to 69,805 m2. The statistics do not include thermosiphon systems (not subsidised by the government), as well as certain not certified types of imported vacuum tube collector systems.
Source: KNREC

The renewable obligation for governmental and public buildings in South Korea came into force in March 2004 as part of the Act on the Promotion of the Development, Use and Diffusion of New and Renewable Energy. The law requires new and refurbished public buildings with a floor space of more than 3,000 m2 to have more than 5 % of their construction budget spent on renewable energy installations in the building. Public institutions include state administrative bodies, local but autonomous entities, and state-run companies.

The first revision came into effect at the beginning of this year. Starting on 1 January 2012, new and refurbished public buildings with a floor space of more than 1,000 m2 have to invest more than 5 % of their budget into renewable technology. This requirement will change in April 2012. By then, it will be stipulated that 10 % of the heating and electricity demand of a building is to be produced by renewable energies.

The second most important support scheme is the 1 Million Green Home Project started in 2009, which supports the installation of solar thermal systems in private homes, multi-family buildings and public rental houses. “At the moment, the majority of domestic installations is supported by this subsidy programme,” Park explains. Each year, the government announces the standard installation costs per m2 and grants a subsidy of up to 50 % of these costs. “In 2011, the government fixed installation costs at 1,040,000 (South Korean Won) KRW per m2, which means a grant of 520,000 KRW/m2 is paid to the private customer”. (EUR 1 = KRW 1,472).

Park regrets that the governmental budget has been limited to the current amount. “For example, the government announced in 2011 a budget of KRW 15 billion for solar thermal systems within the ‘1 million home programme’. The anticipated number of residential solar thermal systems subsidised from this budget in 2011 was limited to a collector area of approximately 30,000 m2.”

KNREC’s market statistics are based on reports from solar thermal system providers eligible for the national subsidy programmes. At the end of 2009, the Korea Institute of Energy Research (KIER) had issued certifications to 17 flat plate collector suppliers, 16 vacuum tube collector suppliers and 2 suppliers of thermosiphon systems. These companies obtained a government´s certificate for their products to enter the national subsidy programmes. The certification comes with the requirement to report production output and sales to the government each year. This means that the market figures of KNREC in the above chart exclude the number of thermosiphon systems, as well as non-certified products sold without grants to customers in the residential sector.