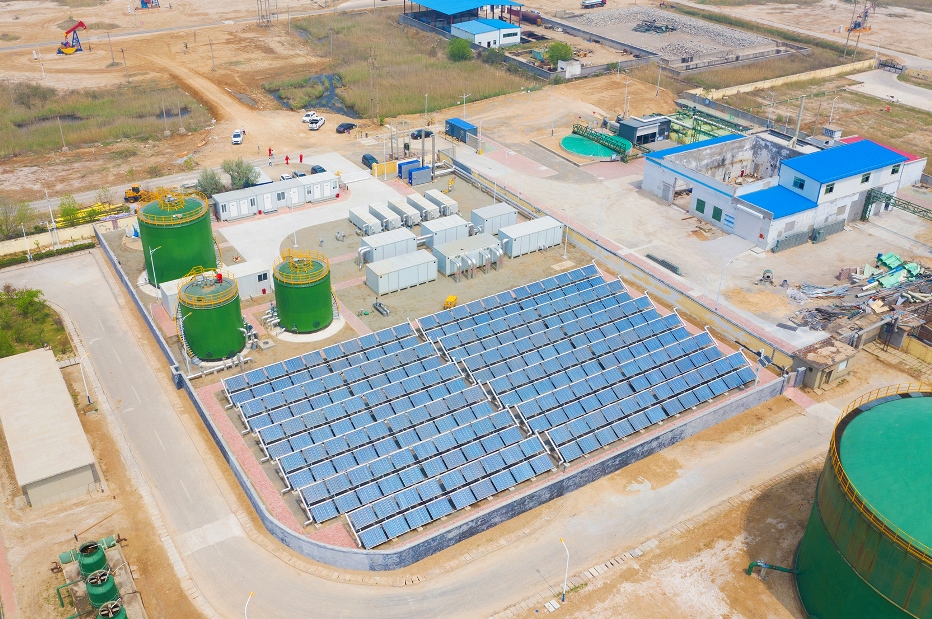 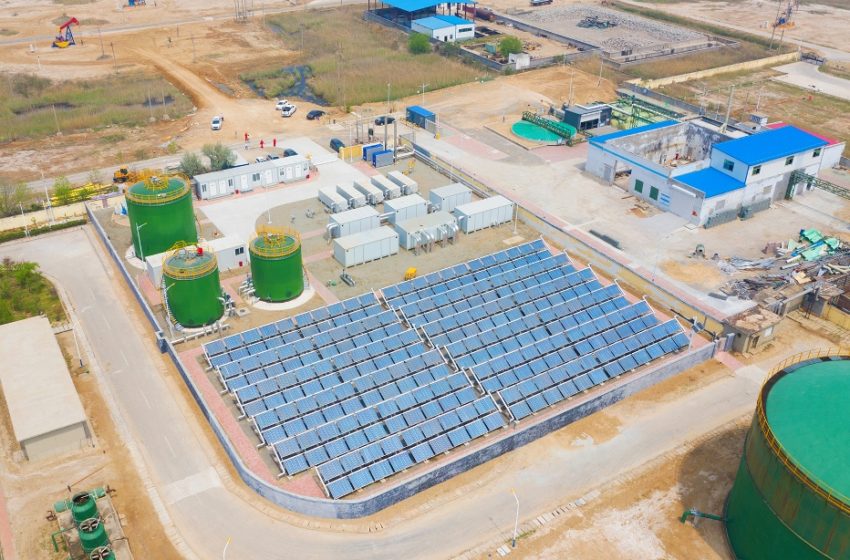 Chinese-based Linuo Paradigma’s new CPC vacuum tube collector was part of several industrial solar heat projects in 2021. The manufacturer’s heat pipe collector not only provides up to 95 °C but also controls the temperature rise to prevent overheating. The largest of the systems installed last year has 3,366 m2 of gross collector area and was commissioned to provide solar heat for an oilfield in Shandong (see photo), while additional systems were started up at Chinese chemical factories. The first customer from the non-domestic chemical industry was Sennics Thailand, which has a 720 m2 field of CPC vacuum tube collectors and several air-source heat pumps provide thermal energy to its new factory around the clock.
Photo: Linuo Paradigma

“We started developing our CPC heat pipe collector in 2018 and produced the first units in 2019. We also applied for Solar Keymark certification so we could offer the collector abroad,” explained Jennifer Fan, Sales Director at Linuo Ritter International. “The collector shows a good solar yield, even in colder weather.”

Enhanced oil recovery promises to be a growth application for the solar heat industry considering the need for thermal energy at oil fields all around the world. The Shandong field put up for state-owned operator Sinopec Shengli Oilfield was Linuo Paradigma’s first foray into the oil industry. In addition to the collectors, Linuo Paradigma delivered the prefabricated equipment room, which includes the heat exchanger, pumps, controls and measurement unit for remote monitoring.

System pays back in 6.5 years without government support

Linuo Paradigma delivered all components to an ESCO, a local energy service company that financed, installed and is now operating the solar field. The ESCO, whose name has not been disclosed by Linuo Paradigma, specialises in renewable solar solutions and had already been in a long-term business relationship with Sinopac before the solar plant was built.

“Even without government assistance, our solar thermal system has a 6.5-year payback period, which met our client’s – the energy service company’s – expectations,” said Fan. Started up in November 2021, the system replaces gas that had previously been used to reduce crude oil viscosity for easy transportation.
Solar yield can be specified in two ways. In China, it is common to state water quantities heated to a certain temperature. This is also how Linuo Paradigma states yields. For example, the oilfield solar system is said to provide 20,000 m3 of water at 40 °C, 200,000 m3 of water at 60 °C or 150,000 m3 at 80 °C per year. In Europe, the yield is given in MWh, while the specific yield is the result of dividing the MWh output of a system by its collector area. Based on these metrics, the Shandong solar field generates 2,006 MWh annually, or 596 kWh/m2 and year.

Key figures of two of the industrial solar heat systems which use the new CPC collectors and were commissioned in 2021 Source: Linuo Paradigma

The project in Thailand came about after Sennics contacted Linuo Ritter International, asking for a plan to supply heat to Sennics’ new factory in Si Racha, in Thailand’s Chonburi province. Sennics, based in Shanghai, is one of the world´s leading providers of polymer additives, Linuo Ritter International the export-orientated subsidiary of Linuo Paradigma. The name Paradigma is a reminder that the company was originally formed as a joint venture with the German Ritter Group, which was dissolved in 2017.

In this case, the industrial client was the direct investor in the system and received no government money to reduce upfront costs. Fan said that the Si Racha factory was Sennics’ first production plant in Thailand and the group wanted to show their social responsibility by opting for a heating system without local emissions.

Because the new factory requires 90 °C heat around the clock, Linuo Ritter International installed not only a 720 m2 solar field, the size of which was limited by available roof space, but also six heat pump units with a capacity of 56 kW each and a 15,000-litre storage tank. “Considering the temperature level requested by the client was 90 °C, we believe CPC collectors were the best choice for the factory,” said Fan.

The additional heat demand during nighttime and the rainy season is covered by high-temperature heat pumps. Linuo Paradigma developed and manufactures these pumps in-house. According to the technical specifications, their COP is 2.5 when water is provided at 80 °C at an ambient temperature of 20 °C. The pump has two operating stages, with one compressor being used for low temperatures, another to meet high-temperature demand.