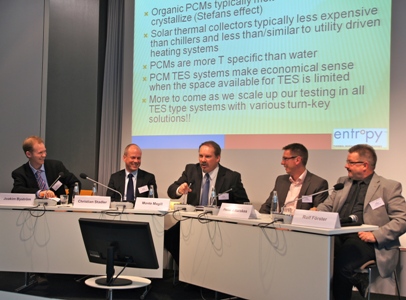 Large storage capacity, modular design, high storage density and low heat losses: These are the current requirements for solar thermal heat storage. The result is that hot water storage products are often stretched to their limits. Alternatives could be phase change materials (PCMs) or thermo-chemical materials (TCMs). During the SMEThermal 2014 conference in Berlin, Dr Henner Kerskes, Research Associate at the Research and Testing Centre for Thermal Solar Systems, TZS, of the University of Stuttgart, Germany, and Monte C Magill, Business Development Director at US company Entropy Solutions, explained the design, operation and possibilities of latent heat and thermo-chemical energy storage solutions (see the attached documents).
Photos: Stephanie Banse
“The challenge is not the energy production – the challenge is the energy storage,” Kerskes said in Berlin. “In addition to sensible heat, the technologies of latent heat and thermo-chemical energy storage are on their way to becoming very promising solutions for the future of solar heating and cooling, as well as CHP.” The goal should be to develop smaller tanks with better storage properties.
Kerskes referred here to a technology and market potential survey carried out by German agency solrico. In December 2013, around 350 solar thermal system suppliers were asked about the market potential of tanks based on PCM or TCM. According to this survey, it seems that most solar manufacturers are very cautious about integrating new technologies, but the awareness of PCM and TCM storage solutions is increasing. Chinese manufacturers in particular see a real opportunity for latent heat storage. Spain, the USA and the UK give the technology a chance, whereas most of the German manufacturers are still hesitating. Although thermo-chemical heat storage is a very new technology, some manufacturers in each of the survey’s focus countries have already attested to its huge potential.

“Phase change materials are compounds which melt and solidify at certain temperatures and in doing so are capable of storing or releasing large amounts of energy,” Monte Magill explained in his presentation. Most often, PCMs used for solar thermal applications freeze and melt between 50 and 60°C. They require a narrow temperature range and high latent heat capacity. The materials that meet these criteria are, for example, paraffin, waxes, salts, salt hydrates, fats and oils.

One of the focus areas of Magill’s company Entropy Solutions is R&D into new agricultural products, with an emphasis on passive thermal energy storage. In Berlin, Magill compared paraffin with a PCM developed by his company from a vegetable source. According to Magill, bio-PCM offers higher average latent heat, a broader temperature range and unlimited stability.
Kerskes mentioned some PCM storage products which are already on the market today. For example, Icebear Energy, Switzerland, offers latent heat storage solutions based on paraffin, with a melting point of 40, 50 or 60°C. According to the company, it has already sold more than 15,000 cells. German firm H M Heizkörper has developed a PCM storage product that works with sodium acetate. The melting point is 58°C and the storage capacity per cell is 50 kWh. Water is also a very good PCM with its melting point of 0°C. That is why Consolar, Germany, has developed a 500-litre ice storage solution, which works in combination with a heat pump and a solar thermal system.

In the field of thermo-chemical energy storage, there have already been several research and demonstration projects on a national and European level. TCMs can store energy in physical or chemical bonds, i.e., through absorption, adsorption or chemical reaction. TCMs allow a much higher energy density in the storage tank than water or PCMs (see the following table).