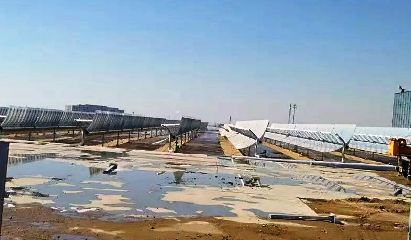 Since October 2016, a 75,000 m² parabolic trough collector field for district heat seems to have been operating in Inner Mongolia, an autonomous region in China. Ruicheng Zheng from the China Academy of Building Research and Hongzhi Cheng said that they had heard about the system, but that all the information on it was only available online. On 28 December 2017, a news article appeared on sohu.com, one of China’s largest online media companies, stating that the system supplied a shopping centre and a development project known as ZhongCheng International City in the village of HongQing De, near Baotou. The journalist who interviewed the owners of the residential buildings and the shopping centre found customers satisfied with the solar space heating that the system provides.
Photo: Sohu.com
During a public tender, Chinese-based turnkey supplier Inner Mongolia XuChen Energy was said to have been awarded the contract to install the solar field. The official company register shows that the business was founded in April 2016, but that it does not yet have its own website.
According to the sohu.com article, the system’s parabolic trough collectors heat up thermal oil to provide solar energy for a district heating network. The backup installation consists of nine 5,700 m³ water tanks. In the article, Canghou Lin, the manager in charge of the collector system at Inner Mongolia XuChen Energy, explained that the huge storage capacity could meet the heat demand of grid-connected users for a full seven days in cloudy weather.
Wang Yu, General Manager of Inner Mongolia XuChen Energy, was quoted as saying that the company had investigated several of the world’s advanced solar thermal technologies to fill the gap in domestic solar thermal heating. “Next year, the second phase will officially begin with a concentrating collector field of 300 mu to supply projects in the tourism sector,” he added. 300 mu corresponds to 200,000 m² of collector aperture area.
In an interview with sohu.com, Zhang Bo Tao, Deputy General Manager of the solar-heated shopping centre ZhongCheng Outlets Real Estate, said in December 2017: “This has already been the second heating season. The heating system has been reliable and works well. It can maintain an average temperature of around 20 °C in the shopping centre and one of around 25 °C in the residential buildings.”
The article was written in cooperation with Liping Jiang an expert in solar thermal and a member of solrico’s partner network.
More information:
http://www.sohu.com/a/213578279_99931482