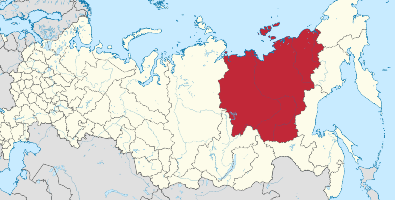 As the Russian solar thermal market relies a great deal on imported components, some regions have devised local subsidy schemes to develop their own solar thermal supply chain, according to the country’s Ministry of Industry and Trade. The Republic of Sakha (Yakutia) at the far east of Russia is such a region: The federal state is almost as big as India, but has a population of fewer than 1 million, and the extremely harsh and dry climate results in average January temperatures of -28 to -47 °C. “We see great potential for solar thermal system suppliers in our region, which is we are trying to provide favourable conditions for the establishment of such companies,” Petr Shishigin, External Affairs Coordinator and Development Group Manager of the Yakutian Investment Development Agency, explains. Yakutia was also the first state of the Russian Federation to adopt a law on renewable energy.
Photo: Wikipedia
In the middle of December 2014, the plenary session of the Yakutian State Assembly approved the legal framework On Renewable Energy of the Republic of Sakha (Yakutia) after a final reading. According to the press service of the Ministry of Housing, Public Utilities and Energy of the Republic of Sakha (Yakutia), the law creates “favourable institutional and economic conditions for the priority utilisation of renewable energy sources, in order to improve the social and economic status of the population, increase environmental protection and enhance the economy of organic (non-renewable) energy sources.” This is of topical interest especially for remote rural areas, where the use of renewable energy is economically feasible in many nomad encampments.
Energy law offers options, but no specific implementation plans
The renewable energy law lists a wide range of measures which could be undertaken by the republic government, as well as local administration to increase the deployment of renewable energy use (see the law in the attached version in Russian). But it does not set any targets or announce any specific implementation plans. Some of the measures considered in the law are:
“The Investment Development Agency of the Republic of Sakha (Yakutia) was founded in April 2013, and 17 specialists from different fields are currently working at the agency,” Shishigin says. The objective is to allow investors to “approach the agency with any questions regarding investment activity within the country – from providing information on how to prepare business plans to offering help after projects are implemented,” Egor Borisov, government head of Yakutia, is quoted on the website investinregions.ru.
More information
http://www.investinregions.ru/en/regions/yakutia/?folder=yakutia
http://www.investinregions.ru/en/regions/yakutia/
http://investyakutia.com/en
This news was written in cooperation with Eugene Gerden, a freelance journalist based in Moscow and specialised in renewable energies.
https://solarthermalworld.org/wp-content/uploads/2015/02/yakutia_renewable_energy_law_november_2014.pdf