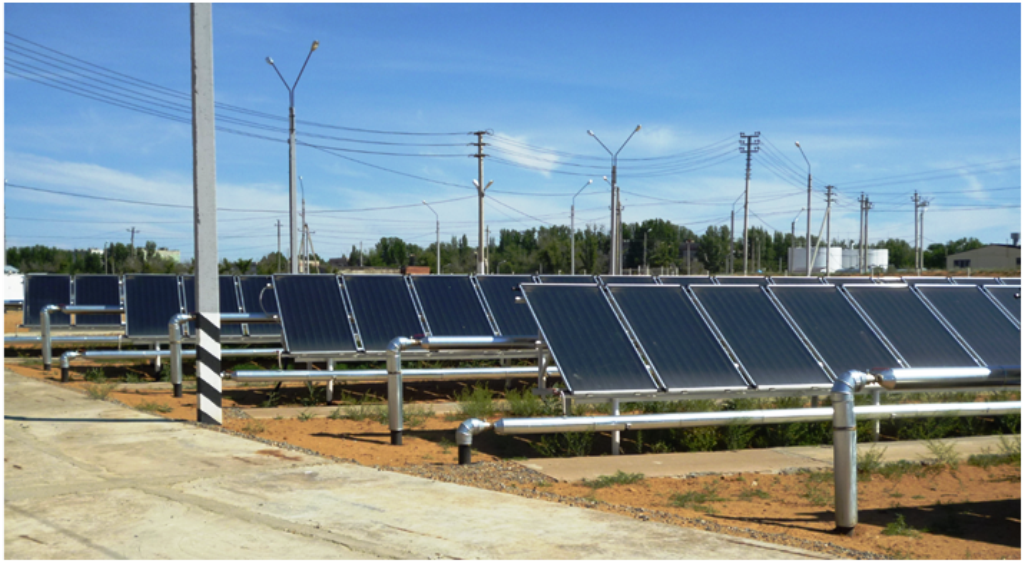 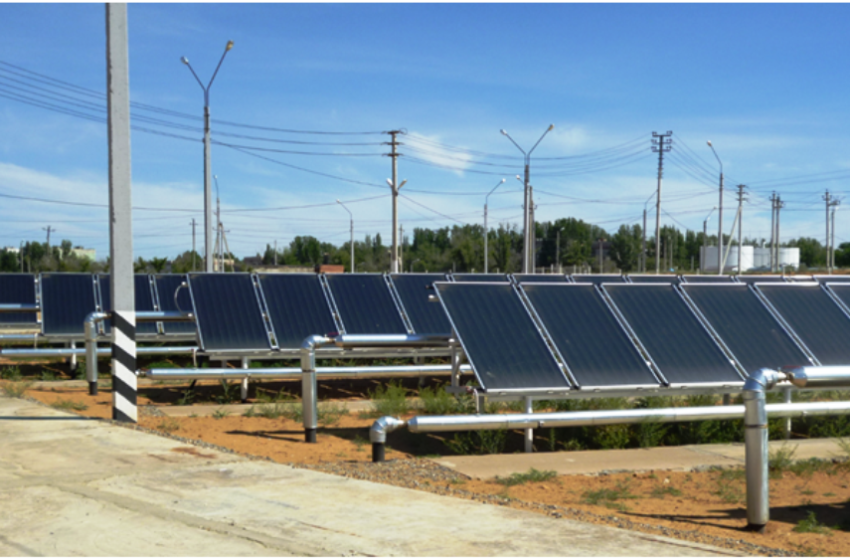 The solar district heating market is still in its infancy in Russia. Despite huge potential, few SDH pilot plants run in the exact same country that is home to the world’s largest district heating sector. Only a handful of systems had been put up so far – six with a total of 1,000 m², in the Krasnodar region bodering the Black Sea, experts working at Kazan State Energy University have said. Furthermore, the photo shows a 4,400 m² solar field commissioned in 2013 in Narimanov in southern Russia, near the Caspian Sea.
Photo: Vitaly Butuzov
Thanks to a high number of sunny days, Krasnodar has become one of the focal points of solar thermal research and development in Russia. The six SDH systems have been installed in the cities of Krasnodar, Anapa, Novorossiysk, Timashyovsk and Ust-Labinsk.
Vitaly Butuzov said “currently, no solar district heating facilities or installations are being developed or built in Russia. The main reasons for the rather low appeal of the sector are the low cost of boiler-sourced thermal energy, a lack of mass-produced solar collectors in Russia, the high cost of imports, and the poor quality of Chinese products.” Butuzov is the managing director of Energy Technology Services, one of the country’s leading solar thermal businesses. He is also a professor at the electrical engineering, heat and renewable energy department of Kuban State Agrarian University in Krasnodar, the capital of the region bearing its name.
17,000 utilities run 50,000 heat networks
Russia is the world’s largest district heating market in terms of installed heating capacity, which reached 1,001 GW at the end of 2013, according to the Thermal Power and Centralised Heat Supply of Russia in 2012-2013 report published by the energy ministry (see link at the end of the article). It states that there are 17,000 heat utilities countrywide which run around 50,000 district heating networks.
The report quotes figures from Russia’s Federal State Statistics Service, Rosstat, showing a total installed district heating capacity of 961,000 Gcal/h at the end of 2013. This corresponds to the above-mentioned 1,001 GW, supplied by heating boilers (66 %) and combined heat and power (CSP) plants (34 %). Most of the district heating capacity was located in urban areas, where population density is much higher than in the countryside. Butuzov said the majority of district heating systems ran on gas, while others used fuel oil or diesel.
30 % heat losses
How much energy all district heating systems provide across the country was answered by a news article posted on a well-established online platform for the energy sector in Russia, peretok.ru, last June (see link at the end of the article). It said that in the past 20 years, sales of thermal energy from public district heating utilities had decreased by a considerable margin, to 589 million Gcal in 2014 (= 2,466 PJ), which was 4.7 % below the previous year. Hence, Russia ranks second after China, which sold 3,183 PJ of heat, according to the Renewable Energy in District Heating and Cooling (DHC) roadmap published by the International Renewable Energy Agency (IRENA) in 2017.
The authors of the 2013 report also analysed the district heating infrastructure and found nearly 29 % of municipal heating networks to be in urgent need of repair or replacement, as per Rosstat. Most systems were in a decrepit state, with accidents waiting to happen. Experts have estimated that around 30 % of the heat transported through those networks is lost. In addition, heat prices are set by the government and subsidised with around Russian Rouble (RUB) 150 billion annually, a figure originating with a presentation given by Russia’s former deputy energy minister, Vyacheslav Kravchenko, and quoted in an article on news portal rosbalt.ru in February 2017. The annual investment required to modernise the pipeline system was estimated to be RUB 250 billion, of which 37 % could be recovered by improving energy efficiency.
To encourage innovation among the country’s district heating businesses, the energy ministry drafted a bill to liberalise the heat market, which used to have a price cap, and ensure that utilities could recoup their investments. State-owned utilities will be transferred into heat organisations – called ETOs in the law – which are responsible for ensuring consumers have reliable, competitive and quality-focused access to heat in their area. The bill, titled Alternative Boiler Houses, was signed by President Vladimir Putin in late July 2017.
Officials expect that the newly established ETOs will be motivated to implement measures to rebuild and modernise heating networks across the country and that the changed pricing policy will ensure those businesses see returns on their investments.
Russian solar thermal experts such as Butuzov, however, remain doubtful about the impact of the new rules. He noted that the integration of solar collectors into district heating is simply a question of economics: Even in the south of Russia, the payback period of a solar field replacing a natural gas system is over 10 years. Imported collectors are expensive and there is no mass production of certified collectors in Russia available. Likewise, there is a lack of data on the performance and cost of solar district heating, so that decisions to invest are mostly made based on Russia’s very few operational demonstration systems.
Eugene Gerden, a Moscow-based freelance journalist specialising in renewable energies, contributed to this article.
More information (in Russian):
Background to reform of district heat pricing, as described in a news report from June 2016: http://peretok.ru/articles/strategy/13222
New district heat pricing model, as detailed in February 2017: http://www.rosbalt.ru/business/2017/02/08/1590010.html
Russian President Vladimir Putin signing the Alternative Boiler Houses Act in July 2017: https://tass.ru/ekonomika/4451236
Several sections of the Thermal Power and Centralised Heat Supply of Russia in 2012-2013 report can be found at http://www.rosteplo.ru/Tech_stat/stat_shablon&nbsp;