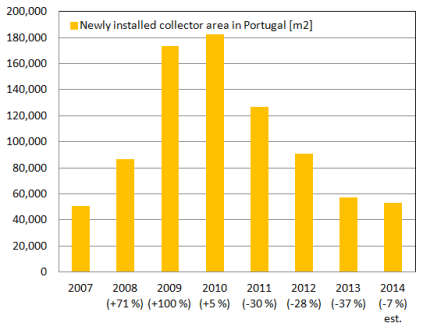 The Portuguese solar thermal market seemed to have stabilised in 2014: The first estimates by the Portuguese national solar industry association, Apisolar, show that the collector area sold last year was at around the same level as in the year before. According to a press release from last November, the association assumes a maximum decline of 7 % in 2014, resulting in a newly installed collector area of around 53,000 m². This brings the market back to the level of 2007, the year after the national solar obligation had come into effect in July 2006, but before the national incentive programme Medida Solar Térmico was launched in March 2009. After the stop of the incentive programme in May 2010, the market declined at double-digit rates over three years.
Source: Apisolar
The total installed collector area at the end of the first half of 2014 was 1,077 million m². Apisolar warned in its press release in November 2014 that the 2020 targets of the National Renewable Energy Action Plans for solar thermal expect an additional 1.137 million m² of collector area to be installed by 2020. Therefore, the association has called on the government to adjust its programmes and measures as soon as possible, in order to increase demand for solar water heaters over the next six years.
Transition from residential to commercial
In addition, Apisolar pointed out that the market was undergoing a period of transition from private residential systems to commercial and public installations, because residential newbuilds were stagnating at below 20,000 units annually. “The share of the residential sector in newly installed collector area dropped from 84 % in 2013 to 58 % in the first half of 2014,” Apisolar’s Vice President Solar Thermal, Victor Júlio, says, whereas the number of collectors installed for hotels, pools and sports centres is increasing. Apisolar summarised the latter three under “tertiary” and they made up the remaining 42 % of the market in the first half of 2014.
Only radical policy change will stop downward trend
And what will change for the Portuguese solar thermal industry in 2015? According to a recent survey by German agency solrico, the country’s solar thermal system suppliers are rather pessimistic about this year’s market development. Of eleven system suppliers which gave an individual forecast for 2015, seven predicted a market decline, two expected a stable market volume and only another two companies were hoping for a small increase.
“If there is no radical change in public investment policy, the downward trend that we have observed since 2011 will continue,” a product manager at a tank manufacturer, argued. “Because of the laws which consider solar thermal systems only to be an option and not a mandatory requirement, we estimate that market volume will continue to fall,” a product manager of a collector manufacturer said. The lack of state support, as well as the on-going recession in the construction sector are the main reasons for the weak demand.
More information:
http://www.apisolar.pt/
http://www.solrico.com