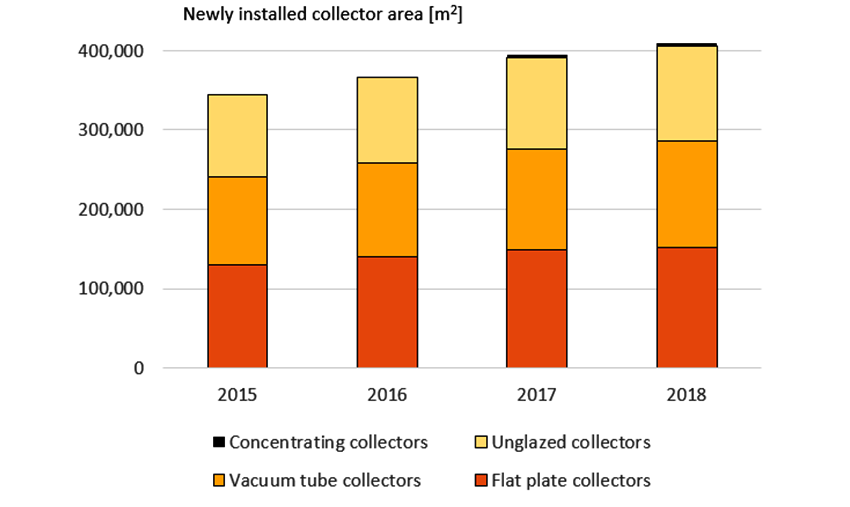 The Mexican solar thermal market continued to grow slightly in 2018. The newly installed collector area was up by 4 %, although some government programmes were stopped or changed because of last year’s presidential elections. Flat plate, vacuum tube and unglazed collectors each took a third of the market, as they had in prior years. In 2017, renewable energy industry association FAMERAC began including the sales figures reported by Inventive Power, the country’s only parabolic trough collector manufacturer so far, in its market statistics.
Source: FAMERAC
FAMERAC President Daniel García has recently named two drivers for demand in Mexico. First, there was a growing interest in solar heat solutions among commercial and industrial (C&I) clients. “In 2017 and 2018, prices for propane gas, a heat source commonly used by relatively large heat consumers in Mexico, increased dramatically, making the solar heat return of investment more attractive,” he said. He estimated that commercial applications had been growing at a rate of above 15 % a year over the last two years and made up about 20 % of total sales in 2018.
The second driver was a long-term loan scheme that is part of a social housing programme funded by the Infonavit bank. García confirmed that this programme helped install between 60,000 and 70,000 residential solar water heaters each year until 2018. Called Hipoteca Verde (Green loans), it offers to cover a family’s cost of investing in a solar water heater as part of the loan taken out to build or refurbish a house or flat. The big advantage of this scheme is that the family can pay back the investment by savings on monthly energy bills over a comparatively long period. Hipoteca Verde was available as early as 2007, as one of the market support measures described in the ProCalSol solar action plan. When it ended in 2012, Infonavit decided to continue the green loan scheme.
However, in 2018, the social housing programme underwent some fundamental changes. Gas boilers are now mandatory in houses financed by Infonavit. And even though solar water heaters are still an option, demand for them will most likely decline to a significant degree because a solar water heater combined with a gas boiler results in high upfront costs. García called the new mandatory regulations “a very bad decision”, as residential solar water heaters make sense economically, considering their average payback period of about four years.
Gas is ubiquitous in the residential water heater market. According to a survey CONUEE conducted in 2018, 14.6 million Mexican households use water heaters, 75 % of which are gas boilers and 14 % are solar hot water systems (2 million in total). Only few people use electric heaters or firewood.
Broad platform to promote industrial solar heat
Solar thermal solutions for industry, hotels and hospitals are generating increased interest by public and international organisations. Germany’s GIZ development agency, which had supported ProCalSol between 2007 and 2012, was among those setting up a programme called Iniciativa Calor Solar to increase the reach of industrial solar heat and other sectors with large heat demand, such as residential and commercial. Said García: “Calor Solar is a great opportunity to advocate the use of solar heat in industry. It will certainly help remove some market barriers.”
The first step was taken in 2017 by launching an inter-institutional platform and establishing several working groups on standards and regulations, business models, demand and promotion. Besides the GIZ, the project is supported by ANES, Mexico’s national solar energy association, and CONUEE, the National Commission for the Efficient Use of Energy.
CONUEE also considers the tourism an important target market for solar thermal. Together with the Mexican Development Bank (Bancomext), the commission has just extended a scheme named MiSol – Solar Heat For Hotels. Its core component is the provision of free technical and financial advice given to hotels ranging from two to four stars. Said García: “MiSol makes it easier for a hotel to decide on a solar thermal investment: first, because the supplier’s unbiased technical advice is reassuring to end users and, second, because Bancomext guarantees to bolster the loan with another, with an interest rate of 14 %.” Putting the spotlight on solar thermal among hotels across the peninsula close to Cuba resulted in the first installations in this Mexican region in the second half of 2018.
Organisations mentioned in this article:
Calor Solar: http://calorsolar.mx/
MiSol: http://www.misol.mx
UNDP Mexico: http://www.mx.undp.org
CONUEE: https://www.gob.mx/conuee
Bancomext: http://www.bancomext.com
FAMERAC: https://famerac.org&nbsp;