Industry professionals often do not use the same language as bankers and investors when they present solar thermal projects. We have asked Patrick Reiter, who has just finished his master’s thesis, titled Solar District Heating – Economic feasibility of large-scale solar thermal systems in municipal district heating networks – a case from Austria, to explain the most important words and key performance indicators, or KPIs, for the financial feasibility assessment of large-scale solar thermal plants. He studied for his master’s degree at the University of Graz’s Institute of Systems Sciences, Innovation and Sustainability Research.
Chart: Patrick Reiter
Financial analysis or capital budgeting is the process of determining the economic value of large investments. It is used for investment decisions which result in high upfront costs and long-running projects and are of strategic importance to a company. Since large-scale solar thermal installations for district heating are considered capital-intensive, long-term investments, capital budgeting is used for these projects.
Static versus dynamic methods
Capital budgeting is categorised into static analyses and dynamic, or discounted cash flow, methods. Static analysis shows profitability in terms of positive economic returns on an investment project over one (average) period, whereas dynamic methods span more than one cycle and account for the time value of money. Although static analyses are less complex and easier to conduct, dynamic methods are predominately used because of the high validity required, mainly over longer periods. Since the values of cash flows depend on when they were recorded, transformations by discounting, or compounding, must be carried out to compare them at specific points in time.
CAPEX, OPEX and LCC
Capital budgeting requires a clear idea of the total project costs, which include capital expenditure, or CAPEX, that is, the initial investment at the start of the project by creating an asset via the construction or purchase of material and goods or both. But operating expenditure, or OPEX, is considered too. Regarding large-scale solar thermal systems, the OPEX combines the costs for operation and maintenance, including labour and electricity, insurance, replacements and, if necessary, land lease. A project’s life cycle cost, or LCC, is the sum of all discounted costs over the project’s lifetime. Besides the CAPEX and OPEX, it accounts for capital subsidies and the residual value of assets after the end of the project. 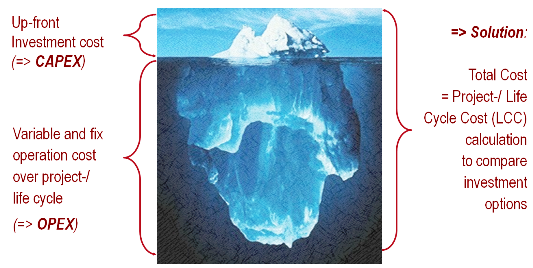 Investment versus life cycle costs: Over the project’s lifetime, the OPEX of a conventional energy system is often much larger than the CAPEX, which means it is important to compare the LCC of different energy supply systems and not just the investment amount.
Chart: Jan W. Bleyl – Energetic Solutions
Discount rate and WACC
Future cash flows are being converted to current values (today) by means of a discount rate or discount factor. Since in economics, it is generally preferred to receive cash today rather than in the future, because it is of higher value today than it will be in some years, this rate internalises the time value of money. The appropriate discount rate for assessing the economic viability of a renewable energy project depends on several factors, since discount rates vary between sectors, companies and projects. A commonly used method in the literature for finding the appropriate rate is called the weighted average cost of capital, or WACC. Based on the structure of project financing, the WACC serves as the hurdle rate, that is, the minimum acceptable rate of return for prompting an investment decision.
Net present value
The net present value, or NPV, and the IRR method are the most popular and commonly used capital budgeting methods in academia. They are based on the annual cash flows over the project period. The NPV measures the economic value of an investment. It is calculated by discounting future net cash flows before or after tax (net meaning the difference between revenues and expenses) to the base year using an appropriate discount factor, such as the WACC, and adding them up (see the chart below). A positive NPV indicates that the project will yield higher returns than the required discount rate, making it attractive to an investor. A negative NPV means that the project will not provide the minimum return required and that it should not proceed.

Illustration of the net present value calculation and the base formula
Chart: Jan W. Bleyl – Energetic Solutions
Internal rate of return
The internal rate of return, or IRR, is the discount rate at which the NPV of an investment project equals zero. Therefore, the IRR and NPV are based on the same series of cash flows. The IRR represents the rate of return which an investment project is expected to generate. It serves as the comparative value to the WACC, which is the minimum expected return required to proceed and is used to contrast similar investment options. However, the IRR is at a decisive disadvantage, since it does not highlight differences between various investment scales. Consequently, it should always be used in combination with the NPV. 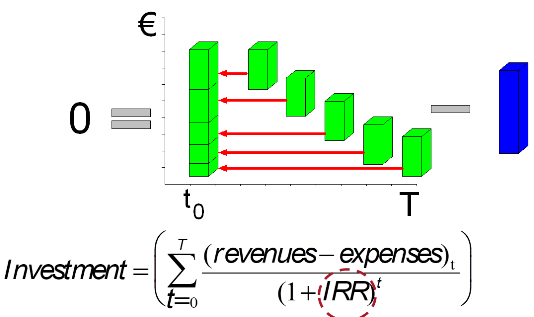 The IRR is calculated with the same series of cash flows as above but with an NPV of zero.
Chart: Jan W. Bleyl – Energetic Solutions
Discounted payback period
The discounted or dynamic payback period, or DDP, is basically the time required for recovering the investment in a project by means of discounting net project cash flows (see the charts above). In other words, it is the point in time when a project’s cumulated discounted net cash flow, after tax, turns positive for the first time, or, more precisely, is at breakeven. To determine the discounted payback period, the NPV calculation is needed once more.
The three KPIs – NPV, IRR and DDP – are commonly used throughout the entire industrial sector for all sorts of projects. They are therefore the most representative KPIs for measuring the financial performance of an investment project.
Author of this article is Patrick Reiter, Project Developer at S.O.L.I.D., Austria.
Contacts for companies mentioned in this article:
www.solid.at
EnergeticSolutions@email.de
News
District Heating
Finance and Incentives
Austria
large-scale solar thermal plants
S.O.L.I.D.
Energetic Solutions
University of Graz