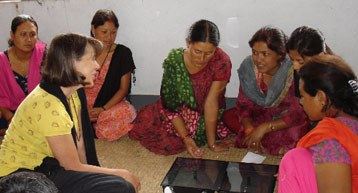 40 % of the world’s population has no access to clean drinking water and suffers from the contaminated water they have to drink. Although there is no shortage of water itself, the means to make it drinkable come with a price many people around the world cannot pay. A newly developed solution from the Swedish scientist Petra Wadström could help improve the situation in areas, on which the sun has proven to shine generously. The so-called Solvatten, which is used in a pilot project in Nepal, consists of a simple, portable 10-litre system whose two containers use sunlight to purify drinking water.


Solvatten uses the sun’s UV radiation as well as their inherent heat to kill micro-organisms and therewith fulfil the standards set out by the World Health Organisation (WHO). First, the water is filled into the system. Afterwards, the water remains in the system for around 3 to 4 hours and is poured out through a filter at a second opening.

The system comprises of a permeable layer and a black surface that absorbs the sunlight. When temperatures reach around 55 °C, an indicator signals that the water is “safe to drink”. During cloudy days, the entire procedure will require 5 to 6 hours to be effective. But because the entire state of Nepal lies on high ground, the UV radiation carried by the sunlight has a higher concentration as well. Thus, even if temperatures are low, Solvatten will still be effective, as was confirmed during a pilot phase among women groups in Siddipur, Nepal. According to Bhushan Tuladhar, executive director of the Environment and Public Health Organization (ENPHO) in Nepal, Solarvatten has a great social appeal: “This easy-to-use drinking water treatment technology is well-received at a household level. But establishing local enterprises in Nepal will be essential for making this technology a successful one.”

The life-cycle of the purification unit can be up to 365 days, depending on the geographic location and dominant weather patterns. It typically costs around US$ 35 and for a usage cycle of 350 days, the cost per litre is US$ 0.01. Or, as rule of thumb: every litre of water boiled needs 1 kg of biomass for its purification. Each Solvatten unit will therefore save up to 2,500 kg of biomass.