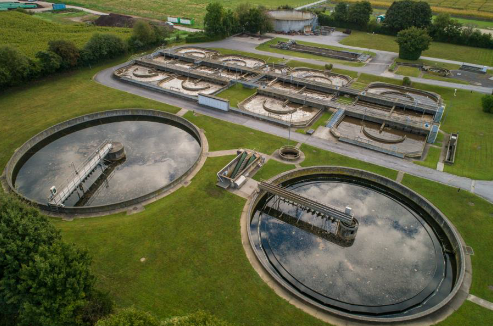 Production of ammonia as a fertilizer is a huge global industry with an enormous energy demand. The Austrian institute AEE INTEC has successfully operated a membrane distillation (MD) pilot plant 24/7 at a municipal waste water treatment plant (see photo). It has the potential to gain ammonia with a lot lower energy usage. Bettina Muster, researcher at AEE INTEC, spoke about the experiences with MD for ammonia recovery during the ISEC conference in March 2022. As temperatures of around 35 to 40 °C are needed on the evaporation side of the MD unit, this is a suitable application for the use of solar energy. Therefore, the lessons learned from the pilot unit in Gleisdorf will be considered in IEA SHC Task 62, which is titled Solar Energy in Industrial Water & Wastewater.
Photo: AEE INTEC

“Our pilot unit at the municipal waste water treatment plant in Gleisdorf, Austria, provided evidence that membrane distillation can be used very efficiently and reliably to remove ammonium nitrogen from waste water. We observed no fouling and no performance deterioration even after weeks of operation with mildly acidic cleaning only”, explained Muster. The pilot MD unit treated 1 m3 of water per day with a 14 m2 membrane area. During a two-week 24/7 operation period an average ammonia recovery of 95 % from the waste water was achieved.

During the 24/7 operation of the MD pilot unit in Gleisdorf, AEE INTEC was able to optimise its performance:

In her ISEC presentation, Muster explained why ammonia production is far away from being a circular economy. The global industrial production of ammonia is huge – annually around 178 megatonnes – of which up to 90 % is used as fertilizer. Unfortunately, the fertilizer is not really used efficiently, explained Muster. 60 to 80 % of the ammonia applied as fertilizer in agriculture worldwide is either lost in the atmosphere or washed into the groundwater.

Large amounts of ammonia are found in waste water streams that are treated in waste water plants. “It is estimated, for example, that in Europe every year 16.4 megatonnes of ammonia end up in the sludge from waste water treatment plants,” said Muster. “So our idea is to use membrane distillation as a method requiring low temperatures to gain ammonia from the liquid waste streams.” 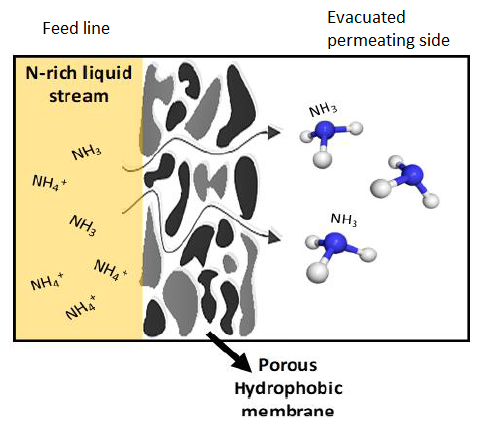 Figure 1: Membrane distillation for ammonia recovery with an evacuated permeate side, which allows the ammonia gas produced to be used as fuel in a fuel cell. Graphic: AEE INTEC

Membrane distillation units utilise a hydrophobic membrane, which separates the ammonium-rich waste water stream from the permeate side. The driving force is the vapour pressure difference induced by temperature and the PH value differences between the feed line and the permeate channel. The pH lift and slight temperature increase bring the water-bound ammonium molecules (NH3) into a free form and the gaseous NH3 diffuses through the membrane together with water vapour. The amount of water vapour passing through the membrane can be minimised depending on the operational parameters).

Muster introduced two ways of running a membrane distillation unit for ammonia recovery. On the one hand, a direct contact MD unit like the one at the waste water treatment in plant in Gleisdorf produces an ammonium sulphate solution which can be used for fertilizer production. This concept could enable a circular economy scenario for ammonia and be one piece of the puzzle in the current search for fertilizer availability. So far, concentrations of 5 g/l N-NH4 can be achieved, which can be increased by changing operating temperatures and module design. As the current concentration in the pilot plant is lower than usual fertilizer concentrations, field tests on fertilizing efficiency for local use will be performed via agricultural experts in the future.

On the other hand, in vacuum MD units, the permeate side is evacuated to extract the ammonia after membrane diffusion in gaseous form (see figure 1). In this case the ammonia molecules penetrating the membrane can be collected in the form of a gas, which can serve as fuel in a solid oxide fuel cell (SOFC) to produce electricity and heat. “We are currently researching novel membranes and modules in order to reach a 30 to 50 % ammonia concentration in the gas, which has shown to work very well for the SOFC”, concluded Muster. 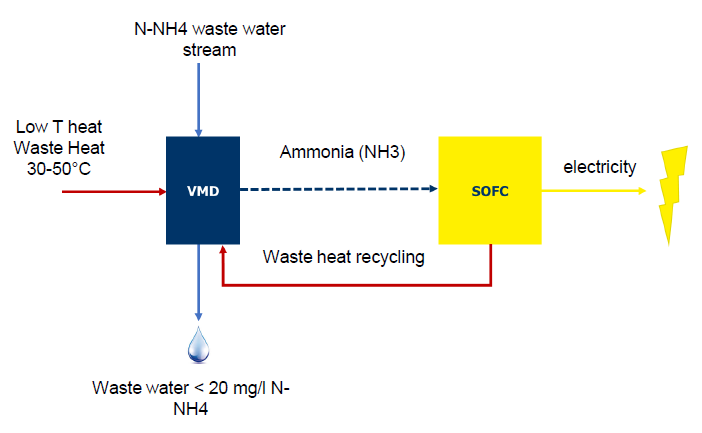