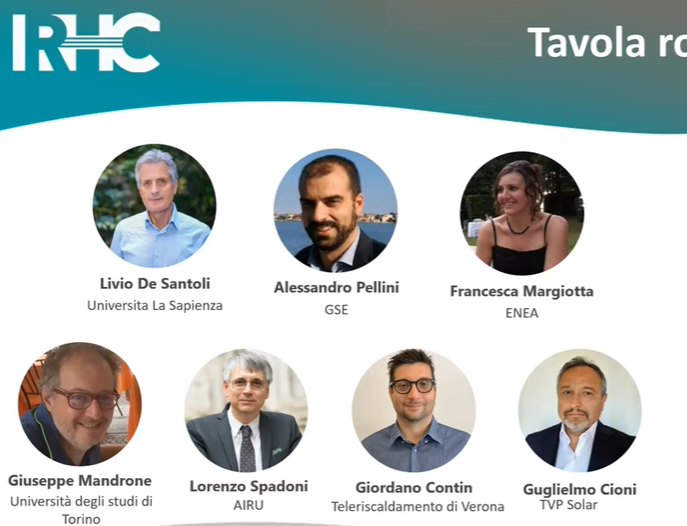 How could heating and cooling contribute to the decarbonisation of the energy sector in Italy? To answer this ambitious question, on 27 October the Renewable Heating & Cooling European Technology Platform, with specific support from Solar Heat Europe, organised a round table with almost 70 participants. The event focused on some of the hottest topics in the sector, touching upon the general policy framework and the incentive scheme Conto Termico. The recording of the two-hour seminar is available online:

One of the opening speeches was made by Gianni Girotto, former President of the Industry Committee of the Italian Senate and father of the national law on energy communities, no. 162 issued in December 2019. Thanks to this law, a specific incentive was introduced for the electricity shared within energy communities. In his presentation, Girotto stressed that he had carefully checked the regulatory framework, realising that the current legislation allows not only the production and sharing of electricity but also of heat in these communities.
Furthermore, the EU project ConnectHeat started in October, which aims at developing seven pilot cases of such thermal communities, including the target area of the Friuli-Venezia Giulia in Italy as well as communities in Belgium, Bulgaria, Croatia, Germany, Portugal and Spain.

Incentives and potential for solar heat

Since 2013 renewable heat technologies have been supported through the Conto Termico scheme in Italy. Alessandro Pellini, Energy Services Manager, spoke on behalf of the subsidy scheme administrator GSE, short for Gestore dei Servizi Energetici. He highlighted that renewables now cover around 19 % of the final gross consumption in the heating sector.
From 2013 to 2021, around EUR 1 billion of incentives were granted within the scheme, of which EUR 270 million were spent on solar thermal systems, corresponding to about 125,000 installations. Biomass boilers received EUR 600 million and heat pumps around EUR 180 million.

Summary of Conto Termico´s support for renewable technologies between 2013 and 2021. Source: GSE 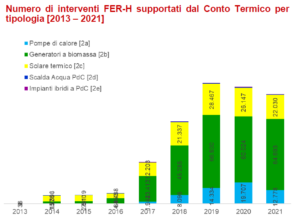 The total solar thermal collector area installed with support from the scheme within the nine year period adds up to almost 900,000 m2. In the period under consideration a total of 1.9 million m2 of collector area were newly installed, so almost every second collector was subsidised. An estimation from GSE says that from 2017 to 2021, the Conto Termico even supported around 70 % of the total solar thermal in Italy in terms of gross surface.

Pellini made clear that the number of applications went down in 2020 and 2021, most probably because of the Superbonus tax rebate for energy efficiency in buildings that was approved in 2020 and was in place until the end of 2021.

82 % of the subsidised area consisted of flat-plate collectors, 18 % was spent on vacuum tube collectors. 63 % of this area was installed in pumped systems, the remaining collectors were part of thermosiphon systems.

83 % of the incentivised surface is for domestic hot water only, while 14 % also contributes to space heating. 96 % of the surface was for the residential sector, while only 4% was used for industrial and commercial applications, thus leaving a large potential untapped for medium and large-scale systems.

One of the newest large solar district heating plants that has applied to Conto Termico for subsidies is a 2000 m2 evacuated-tube collector field installed on slopes belonging to the heating centre of the city of Verona, northern Italy. If approved, the grant will cover around 45 % of the investment costs.

Storing and distributing the heat

Lorenzo Spadoni, President of AIRU, the Italian District Heating Association, then underlined the need for a modern district heating sector able to include more and more renewable energies. To reach this goal, however, some market imbalances need to be removed. For example, district heating was excluded from the Superbonus tax rebate in 2021. The district heating sector is also still struggling to be allowed a special lower VAT regime as is in place for the other energy sources and technologies.

Giuseppe Mandrone, Professor at the University of Turin, also emphasised that the flexibility of the district heating networks and their capability to include more renewable energies also depends on the availability of large seasonal heat storages acting as long-term buffers.