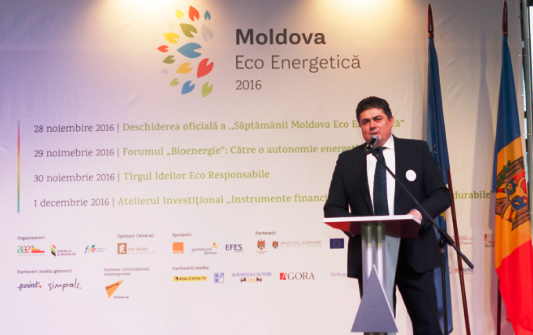 The fourth edition of the Moldova Eco-Energetica Gala was held on 2 December 2016 in the International Exhibition Centre MoldExpo in Chisinau. Around 400 guests attended the event, which is one of the highlights of the Moldova Eco-Energy Week organised every year by the Energy Efficiency Agency (EEA), the Energy and Biomass Project in Moldova and the national Energy Efficiency Fund (EFF). Deputy Prime Minister and Minister of Economy Octavian Calmâc (see photo) and EEA Director Mihai Stratan presented awards to 16 projects and initiatives using and promoting renewable energies and energy efficiency, two primarily solar thermal ones among them.
Photo: EEA website
Deputy Minister of Economy Valeriu Triboi believes that the Moldova Eco-Energy Week has become the most important means that the government has at its disposal to promote energy efficiency and the use of renewable energy sources: “This is not a trite statement, but a commitment by the Moldovan government to do their utmost to increase energy efficiency at national level and tap renewable potential.”

48-collector field on hospital roof in Chisinau, Moldova
Photo taken from the YouTube video https://youtu.be/SXIY6E_V2uo
Sixteen winners were chosen from the 48 applicants: Two of them had used solar thermal technology in their projects. The first of these installations is a 48-vacuum tube collector field at the Experimental Republican Center for Prosthesis, Orthopedics and Rehabilitation in Chisinau (see photo), installed with technical and financial assistance from the EEF. The pilot project started operations in November 2015. According to the EEF, the hospital now saves EUR 54,000 each year.
The second award was received for a solar thermal project installed at municipal Hospital St. Archangel Michael in Chisinau in 2015. This 36-vacuum tube collector system provides hot water for 470 employees and has significantly reduced the facility’s electricity consumption.
In addition to the award ceremony, the Moldova Eco-Energy week included additional events, such as an investment workshop, a bioenergy forum as well as a small fair, which showcased the renewable and energy efficiency projects submitted for this year’s prizes.
Websites of organisations mentioned in this article:
Energy Efficiency Agency: http://www.aee.md/en/
Energy Efficiency Fund: http://www.fee.md/index.php?l=en
This news piece was written jointly with Mihai Vintila, owner of InfoEst.ro, a Romanian news portal.