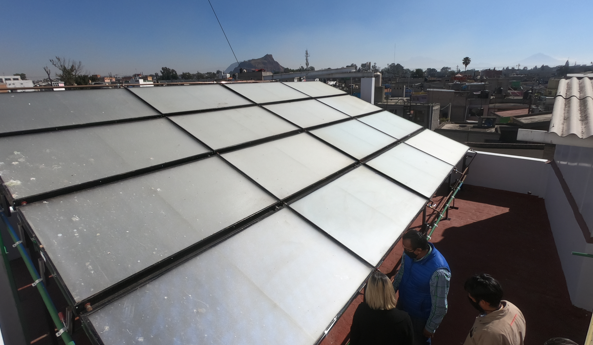 Mexico City has recorded successes and setbacks on its journey as a solar capital. Claudia Sheinbaum, the Mayor of the city with 20 million inhabitants, announced the Energy Sustainability Strategy in May 2019. Since then, a pleasing 15,000 residential solar thermal systems have been installed city-wide, driven by direct subsidies. However, only two solar thermal systems for small and medium-size enterprises have been commissioned so far. The photo shows one of them, a 147 m2 collector field for a tortilla factory. Furthermore, the solar building standard in force since 14th February 2019, which stipulates a 70 % solar thermal contribution to the total annual hot water demand of new buildings or those being renovated, is under revision because of complaints by builders and developers from the housing sector.
Photo: Mexico City administration

As part of the Energy Sustainability Strategy 2019 to 2024 for Mexico City several subsidy schemes support the installation of PV and solar thermal systems. One of them is the Energía solar para MIPYMES (Solar energy for SMEs) programme, which is administered by the unit for renewable energies chaired by Fernanda García Barrera in the city’s administration.

Under the MIPYMES scheme her department has provided 2.2 million Mexican pesos (MXN), (EUR 96,000) triggering a total investment of MXN 12 million (EUR 533,000) since 2019. “So far, the demand for photovoltaics has been far higher than for solar thermal systems,” explained García Barrera. In total, the programme has enabled about 40 solar projects in the industrial and service sectors, but with an unbalanced distribution as 38 of these involved photovoltaics and only two were solar thermal installations.

The MIPYMES support should encourage the dough and tortillas industry to use solar heat as their factories need a lot of water at 80 °C. The other target sector is private swimming schools, nurseries, small textile businesses and retail shops. García Barrera explained that the Solar Energy for SMEs programme has recently increased its budget to MXN 3.5 million annually and she expects budget to be available until 2024.

In the starting years 2019 and 2020 both technologies – PV and solar thermal – were subsidised with 20 % of the investment costs. Since the beginning of 2021 the support for solar thermal was enlarged to 40 % to support the private sector that had to cope with the negative impact due to the pandemic. “This additional funding should encourage the use of solar heat and the objective is now to achieve at least 30 companies and institutions installing solar thermal systems in 2022,” says García Barrera. 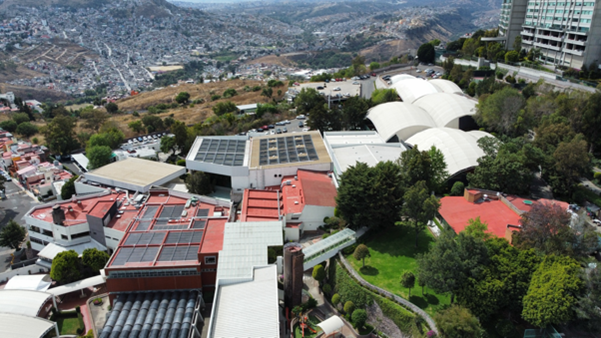 Solar thermal system for a sport club near Mexico City. The Mexican technology provider Módulo Solar financed, installed and operates the plant and signed a heat delivery contract with the sports club. It has to pay 20 % less for the solar heat than for its fossil-produced heat.
Photo: Módulo Solar

While the Solar Energy for SMEs programme has had little impact so far on solar thermal sales in Mexico City, there are some other support schemes that have boosted demand. Since 2019, a total of 15,025 solar water heaters (around 60,000 m2) have been installed in private households and social housing units thanks to other incentives. The most successful scheme has been direct investment grants from the different municipalities, which have enabled the installation of 7,311 systems.

Likewise, the Housing Institute (INVI Instituto de la Vivienda), which promotes the construction of social housing, has enabled the installation of 6,735 systems. Finally, García Barrera explained that since the earthquake in 2017 there has been specific aid for the reconstruction of housing and thanks to this a further 887 solar thermal systems have been commissioned in the city.

García Barrera added that her department is also cooperating with the Mexico City Environment Secretariat, which is promoting the solar building standard NADF-008-AMBT-2017. This regulation was published in 2017 and came into force in February 2019. García Barrera admitted that they are having problems with its application.

The building standard requires the installation of a solar water heater that provides 70 % of the hot water demand in new buildings or those being renovated. For industry, the public sector and public services the requirement is 40 %. The problem raised by the builders and developers is that not all certified solar water heater models comply with the 70 % rule. Some of them provide only a 60 or 65 % solar contribution.

García Barrera made clear: “We are making some proposals for amendments to make the standard easier to comply with and we hope that the revision will be made this year.”