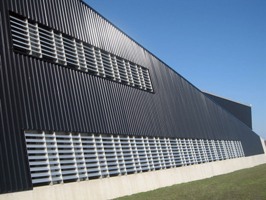 Air collector companies exist very much in the shadows of the manufacturers of water collectors. Therefore a Solar Air Heating World Industry Association (SAHWIA) is necessary. But not all manufacturers are pleased with the procedure that lead to the association’s founding. Photo: Solarwall

Air collectors are confronted with a lack of information on the part of planners and consumers, and only rarely are they explicitly included in support programmes. For this reason, most manufacturers of solar air collectors wouldn’t object to the basic argument put forward by Duncan Coutts from the Canadian air collector company Conserval Engineering who stated that the sector lacked a body to represent its own interests. However, some were not so pleased that his company organised the founding of its own association Solar Air Heating World Industry Association (SAHWIA) without consulting other manufacturers. Conserval Engineering – better known under their brand name Solarwall – organized the first association meeting in a Munich beer hall during the Intersolar 2009 trade fair at the end of May.

“I find it a little bit odd when an association is founded and structures are put in place unilaterally before people have even sat down at a table together for the first time. In addition, it wasn’t helpful that numerous European distribution agents for a Canadian manufacturer and relatively few independent manufacturers were invited,” criticised Almut Petersen, Sales Manager of Grammer Solar GmbH. Apart from the afore-mentioned German company and from Enerconcept Technologies Inc. from Canada and Solar Breeze from Australia, there were in fact no other manufacturers present at the meeting. Instead, a dozen Conserval Engineering agents were present at the large table at the Weisses Bräuhaus in Munich. For this reason, Christian Vachon from Enerconcept doubts that Conserval Engineering wants other companies as members of the association.

Coutts counters by saying: “The inaugural meeting of SAHWIA was attended by private and public sector organizations from eleven countries on three continents. The feedback was overwhelming in support of this organization.” He added that the start of any new organization would always have its “growing pains”, but that these would be resolved over time.

The air collector sector does not only have a recognition problem; market development is also being held back by the lack of uniform international test standards for the performance of solar collectors that use air as the working medium. Coutts explains that SAHWIA’s goal would therefore be that the different test facilities combine their expertise based upon their experience and ability to execute different solar air heating tests. “We have therefore established three committees within SAHWIA. The first committee is tasked with creating a single document which describes the various test standards for each version of solar air heating collectors. The second committee will be responsible for initiating a CEN Workshop and subsequent creation of a European Norm. The third committee will be focused on SAHWIA operations and look for financial support from the EU or other governments for the operation of the organization.”

However, Petersen does not think that the Munich meeting represents the foundation of an association. “Essentially, I don’t consider that an industry association has been founded. An Internet site with a membership form and a press release doesn’t make an association. An association needs members that have commonly agreed articles of association and an elected board.” As far as she were aware, all of these things are lacking.
However, she said that she regarded the meeting as a good opportunity to discuss the issues facing the sector with other market participants. “We would like to continue this dialogue and cooperation now that a project for a European Norm for air collectors is on the cards.”