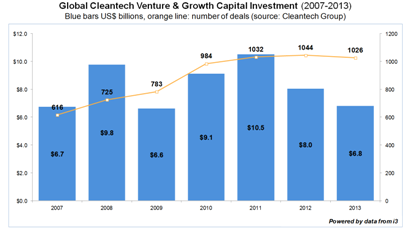 The Cleantech Group tracks all Cleantech venture & growth capital investments worldwide. The chart shows the up and down of the global cleantech venture and growth investment in the last seven years. “There was a peak in 2008 just before the financial crisis, followed by lower investment levels in 2009 and 2010. It came back in 2011, however the investment dropped significantly in the last two years by 25 % in 2012 and by 15 % in 2013,” explained Nicholas Atkins, member of the European Advisory Board of the Cleantech Group and partner of Georgieff Capital Advisors, at SMEThermal 2014, an international conference for industry professionals held in Berlin on 18 February. Atkins has over 20 years of experience in corporate finance and private equity.  He leads Georgieff Capital’s clean technology advisory practice.
Figures (3): Cleantech Group
Solarthermalworld.org: It seems like a difficult environment for cleantech investments?
Atkins: Correct, especially for early startup companies the market is tough. A number of investors have had their fingers badly burned over recent years. Hence, their business models have changed and the definition of early stage has migrated. Early stage used to be technology validation with no revenues and some way off commercialisation. Early stage now is proven technology, pilot installations, actual customers and ideally revenues over 1 million.
Back in 2007 and 2008 in Europe 45 to 50 % of cleantech investment was in early stage companies – seed round and A round. If you look at that today, this share is probably more in the range of 10 % or 15 % at the most.
Solarthermalworld.org: What are the investors today looking for?
Atkins: Venture investors today will no longer take huge technology or market adaption risks and they are not going to invest in very capital-intensive businesses. Investors are now looking at less capital intensive businesses, for example firms with an IT element with no big factories. This shows up in the chart above, where the number of investments has stayed fairly stable in the last few years, but the investment amount has declined, hence it is a lower value per investment as we are moving forward towards more capital-efficient businesses. As you can see from the following chart, the solar sector – which is mainly photovoltaics – fell from around 40 % of total investment in 2008 to around 10 % in 2013. Other sectors, such as energy efficiency, which use new and more capital efficient business models have become more prominent.

Solarthermalworld.org: How does solar thermal perform within the solar section?
Atkins: Solar thermal including CSP and low temperature heat is a small sub section of the solar segment. It goes up and down very much depending on whether there are fairly large CSP investments.  You can see from the following chart that the level of investment has tailed off perhaps even more significant than PV, so I think a lot of work has to be done to get investors interested in and excited about solar thermal technology companies.

Solarthermalworld.org: How do you expect the cleantech sector to change in the next years?
Atkins: I think the investment environment is going to continue to be difficult, partly because investors, especially the venture capital firms, are struggling to raise second and third funds as the returns of their previous funds have been poor or unrealised. So there is an overall issue where there are a lot of great companies out there and not much capital supporting them. There are corporate venture firms, family offices as well as governmental programmes that help, but it is not an easy market.
However, there are some signs of an overall market improvement. Recently a number of European venture firms have done first or final closes of new funds, so there is some light at the end of the tunnel. As the technology develops and cost improvements in the solar thermal market can be demonstrated, then at one moment investors will wake up and say ‘this is a real opportunity’. We should get there. I see it improving, but it will still be a tough market for the next year or two.
Find more information at:
Nicholas Atkins, Partner, Georgieff Capital Advisors
n.atkins@georgieffcapital.com
http://www.georgieffcapital.com