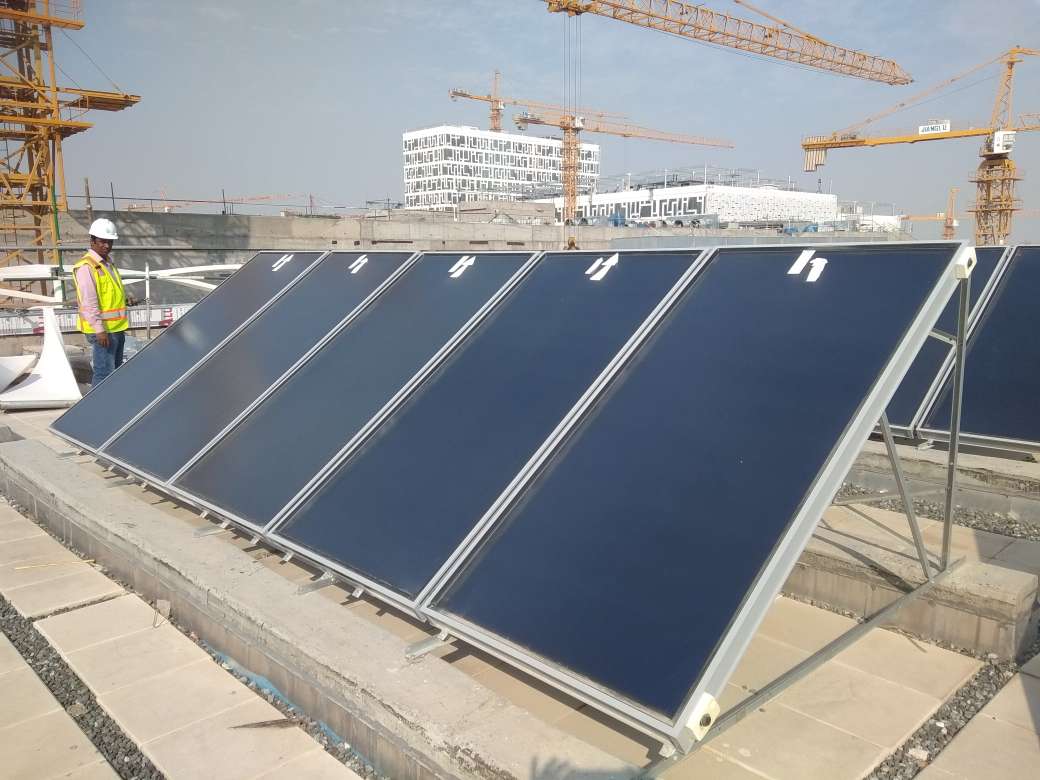 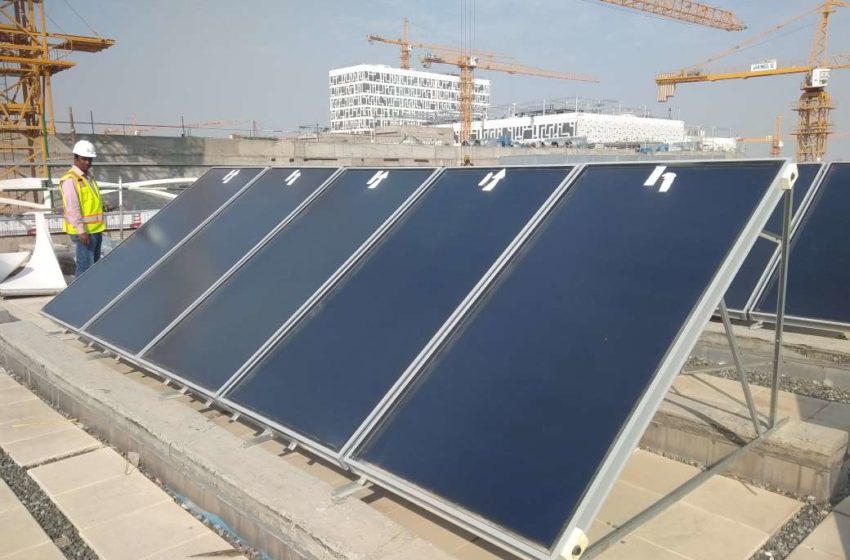 The Kuwaiti-based company Ecobuild/Ecobold General Trading* is about to finish the installation of six solar hot water systems totalling 742 m2 of collector area on new campus buildings at Sabah Al-Salem University in Shadadiya, Kuwait. These systems, scheduled for commissioning in May 2020, are expected to provide hot water to the Colleges of Law, Sharia and Social Sciences. Each faculty is housed in two buildings to separate men and women. The buyer of the installation is the Kuwaiti government, which aims to increase acceptance of green heat across the country. In addition, Kuwait’s Public Authority for Housing Welfare (PAHW) wants to install solar water heaters with storage capacities of 500 litres in new villas, to be built between 2020 and 2024.
Photo: Ecobuild
Ecobuild was awarded the contract to provide a turnkey solution for the six buildings as far back as July 2018. It was responsible for performing the relevant computer simulations as well as designing and installing the entire system, including all tanks and pipes. Ecobuild is in a partnership with Bulgarian manufacturer Nobel, which provided the collectors for the project. “The solar thermal system has been designed to supply 76,000 litres of hot water a day, at temperatures ranging from 25 °C to 70 °C and with central electric heating being used as a backup,” explained Sukhbir Singh, Lead Project Engineer at Ecobuild.
The six buildings are used by around 6,800 students, plus 1,184 faculty members and staff, on a daily basis. The solar systems will supply hot water to, for example, rest rooms, ablution rooms and kitchens.
“With the help of the Polysun tool, we modelled the six solar hot water systems separately to see what monthly solar yields and solar fractions we could expect,” said Singh. The following charts show the results from analysing the 173 m2 solar field installed on one of the university buildings. The solar fraction of hot water production changes significantly throughout the year, ranging from 51 % in January to 100 % in August, and depends mainly on how much hot water is used in the building overall.

Monthly solar fractions according to a Polysun simulation. During summer break, hot water demand from the university buildings drops, which results in a higher solar fraction.
Source: Ecobuild
“We have also designed and delivered an automatic panel cleaning system that cleans the solar collectors at regular intervals. A time and duration for the cleaning cycle can be set by using the master control panel,” explained Singh. For this wet-cleaning system wide-angle sprinklers will be mounted on top of the collector arrays.
SWH are becoming a staple of new publicly planned villas
Kuwait’s new policy to promote the installation of solar thermal systems is driven by the need for reducing electricity consumption. An IRENA study published in 2019 notes that Kuwait has been a net natural gas importer since 2010 and generates nearly 50 % of its electricity by using these imports. The other half is produced by burning national oil resources.
As a result, the Kuwaiti government has announced plans to have solar water heaters installed in the new villas that it wants to see built over the coming years, Ecobuild said. These villas are family homes that, once completed, are sold to citizens. In January, Ecobuild participated in the first tender events launched by PAHW. They included requests for 500 litre solar hot water systems plus electric backup heaters. The systems are to be put up between 2020 and 2024.
Organisations mentioned in this article:
http://www.theecobuild.com
http://www.almashaan.com
This article was written by Lotus Shaheen, a German-based clean energy researcher with expertise in solar thermal quality certification and MENA markets.
*The Arabic name of this company is in some documents translated with Ecobuild and in some documents translated with Ecobold. In this article the translation Ecobuild is used.