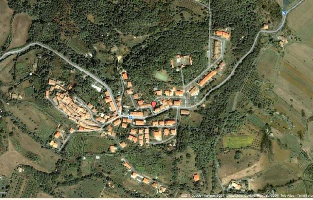 On 29 and 30 September, the project partners of the EU project SDHtake-off met for a workshop during the GeoThermExpo in Ferrara, Italy. “All the big players in district heating in Italy joined our meeting,” project coordinator Thomas Pauschinger from German research centre Solites says. He sees that as an indicator for the growing interest of the district heating industry in solar thermal applications. The Italian town Serrazzano (Photo) might soon have a solar district heating system.
Photo: Geo Energy Service

The workshop was opened by Fausto Ferraresi, President of the Italian district heating association AIRU. He expressed his commitment to solar heat, in which he was supported by the General Secretary Luigi Franco Bottio. The representatives of AIRU, as well as Sabine Froning, Managing Director of the European district heating association Euroheat & Power, then stayed for the full workshop. Pauschinger sees it as a success of the SDH project that the district heating industry has started taking solar seriously. Altogether, 70 participants from more than 20 European countries joined the workshop on its first day and more than 100 on the second. Among them were representatives of small and large, mainly Italian district heating operators, such as A2A for Milan and Brescia, Iren for Turin, Grupo Hera for Emilia Romagna, but also component manufacturers, such as Rehau (Germany, borehole heat stores and heat transfer stations), Alfa Laval (Sweden, heat exchangers), and numerous collector manufacturers.

SDHtake-off started in July 2009 and will run until June 2012. Among the project partners are not only well-known solar district heating experts and component manufacturers, such as Marstal District Heating from Denmark or SOLID from Austria, but also the district heating associations of the key countries – for example, AGFW from Germany, AIRU from Italy, ADHCR from Czech Republic and the European umbrella organisation Euroheat & Power (more about SDHtake-off on solarthermalworld.org, including a full list of the project partners http://www.solarthermalworld.org/node/879). The SDHtake-off partners agree that a mid-term goal of 15 GWth (21 million m2 of collector area) for Europe can be achieved by 2020 if market barriers are removed and solar district heating is well promoted. The target figure represents about 1 % of the district heat used in Europe. On the long run, even 158 GWth are thought to be possible.

“The partnership is still in its early stages, but getting better constantly,” Pauschinger comments. Compared to the focus countries Denmark, Sweden, Germany and Austria, solar district heating is still in its infancy in Italy, similar as in the Czech Republic. Now, utility Gruppo Hera is planning a pilot project in Ferrara, Italy (about 2 Mwth) and Tuscany’s local utility Geo Energy Services is building three new solar thermal plants to integrate them into existing geothermal steam powered district heating grids in 2012 (see http://www.solarthermalworld.org/node/2871). “The diversification and the use of local energy sources is of utmost importance for utilities operating district heating grids. Among these sources, solar thermal is undoubtedly one of the most interesting and promising options for Italy,” Franco Buscaroli, Head of the ‘Integrated District Heating’ working group of AIRU, states in the project´s brochure.

The next workshop of SDHtake-off will take place in Sweden in May 2012.