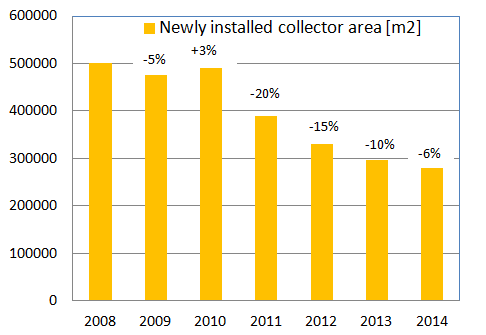 According to the market survey by Assotermica, the Italian Association of Manufacturers of Equipment and Components for Heating Systems, Italy’s newly installed collector area went down to 280,000 m2 last year. The survey covers about 80 % of the market, with the remaining share having been extrapolated. In search of an explanation for the apparently relentless market collapse since the peak year of 2008, during which 500,000 m2 were installed, solarthermalworld.org spoke with Federico Musazzi, Secretary General of Assotermica and Official at roof organisation ANIMA, the Federation of the Italian Associations of Mechanical and Engineering Industries.
Source: ESTIF/Assotermica

Two things have to be noted before reading the interview: First, the chart above is based on the annual market study of the European Solar Thermal Industry Federation (ESTIF). According to the official ESTIF figure for the Italian market, which is 297,000 m2 of newly installed collector area in 2013, the relative decline in 2014 was 6 %, whereas Assotermica assumes a decline of 25 % in 2014 in reference to a different solar market volume installed in the year before.

Second, there is the impact of national subsidy scheme Conto Termico on the Italian solar thermal sector: Official figures by the programme´s administrator, Gestore dei Servizi Energetici, show a disappointing EUR 12.5 million in grants for solar water heating systems between the start of the programme in July 2013 and the beginning of December 2014. This is 54 % of the EUR 23.4 million which were spent on all technologies. The budget allocated in the first year amounted to EUR 900 million, of which EUR 200 million were reserved for public institutions and EUR 700 million for private entities (for further details check the database of incentive programmes).

Solarthermalworld.org: The market declined again in 2014. What is your forecast for 2015?

Musazzi: Even though it may be too early to say, it is clear that the present year will be another tough one for the solar sector. Rather than naming it a forecast, it would be our hope that at least the decline stops and market figures will remain at present levels.

Solarthermalworld.org: Currently, there are two incentive schemes in Italy: the 65 % tax rebate, which will stay in force at least until the end of this year, and national subsidy scheme Conto Termico. Do you think these support schemes have been effective and have produced satisfactory results?

Musazzi: The tax rebate is a very important incentive, especially because after several years, it has become a mechanism which is well-known and trusted by end users. It is working effectively, not only for solar thermal, but also for condensing boilers and heat pumps. Conto Termico must be renewed and strengthened, since around 2 % of the budget allocated by the government has been used up so far. Above all, this is because of application rules being too complicated. At the moment, the incentive scheme is under revision and an improved version should come into force before summer. Assotermica is working together with the Ministry of Economic Development to introduce additionally a criterion for rewarding expected solar collector yield. Subsidy levels should depend on the specific yield of the collector and table 2 of the Solar Keymark certificate may be used for the calculation. But all of this will be part of the revised Conto Termico requirements.

Solarthermalworld.org: What is Assotermica doing to foster solar thermal use in Italy? How are you organised internally?

Musazzi: Within the association, we have a specific working group for solar thermal led by Giovanni Fontana, who is responsible for technical consultation at renewable heating system provider Italtherm, a company founded in 2011 by a team with 30 years of experience in solar thermal. Within ANIMA, we are exploiting synergies with all other subsectors and technologies associated with heating in a wider sense. The core of our work is to try and shape technical legislation which will take into account the specific needs of renewable technologies. For example, eco-design, labelling, energy certification in buildings, as well as installer qualification are crucial issues in our day-to-day business. Together with ANIMA, we also carry out a quarterly assessment of the sales on the Italian solar thermal market by directly interviewing our members.

Solarthermalworld.org: Over the last months, there have been ongoing negotiations for an agreement with Assolterm, the Italian solar thermal industry association. However, no agreement was reached. What happened?

Musazzi: So far, Assolterm members have legitimately decided to keep their association, which focuses on solar thermal only. But we still collaborate for day-to-day business activities, since we have the shared goal of bringing solar thermal to the forefront. So, it may be possible to try and see again later if the conditions for an agreement between the two associations are met.

Assotermica has its office in Milano and has a staff of five. The association represents around 60 members, which, in some subsectors, cover 90 % of the market. ANIMA represents a sector which employs about 194,000 people and generates a total turnover of about EUR 40 billion per year. Founded in 1914, it is comprised of over 60 associations and industry sector groups and has 1,000 companies as members.