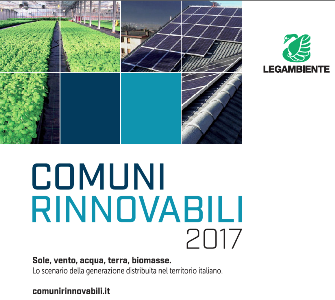 In 2005, Legambiente, the largest environmental association in Italy, began publishing an annual report called Comuni Rinnovabili to show renewable deployment in Italian municipalities. The number of communities which had solar thermal installations increased from 108 in 2005 to 6,820 in this year’s edition, which is based on 2016 figures. Data is collected by sending a questionnaire directly to the municipalities and cross-checking the responses with official figures from GSE, the state-owned business managing renewable incentive schemes in Italy, and information and reports sent in by regional and industry associations and individual companies. Less populated municipalities are doing well in these statistics: Of the 6,820 communities which reported solar thermal installations, 4,454 are small and very small ones with a population below 5,000.
The number of responses added up to 7,893, meaning around 86 % of all municipalities reported solar thermal installations in their area. The small town at the top of the solar thermal ranking was again Seneghe, in the Oristano province of Sardinia, which boasts 2,075 m² per 1,000 population if private and public building installation figures are combined (see the table below).
Larger cities showed less appealing results regarding square meters per capita, but solar thermal deployment was slightly on the rise in these areas too. Comuni Rinnovabili includes a table showing the top 10 solar thermal cities and towns, from 9,185 m² in Perugia to 4,060 m² in Senigallia. Italy’s capital Rome is part of the top 10, at 5,188 m², whereas Milan, another big Italian city, is not.
Overall, 75 municipalities were above the EU threshold of 264 m² per 1,000 population.
Source: Legambiente
Solar thermal for public buildings
Additionally, Legambiente looked at the degree to which municipalities were utilising solar thermal to provide hot water and space heating in public buildings. The results from the questionnaire responses showed that 607 municipalities had been using solar thermal in offices, schools and gyms, which translates into 60,253 m², of which 4,200 m² were installed in 2016.
Favara, a municipality of Sicily, had nearly 2,000 m² installed for public buildings, followed by Milan, which reported about 1,500 m² set up mostly at schools and on parking roofs of public transport facilities. Then there was Rome with 1,485 m² and Catania with 1,160 m².
Building regulations provide installation instructions
Municipalities have likewise been promoting solar thermal in their building regulations by introducing mandatory requirements and standards beyond national rules. For example, in Rivoli in the Piedmont region, solar thermal must meet 60 % of the domestic hot water requirements in newbuilds. There is also an incentive which is thought to help push the share to 70 %. In Grosseto, Tuscany region, the incentive in place aims at an 80 % solar thermal share in domestic hot water production.
These regulations may include precise instructions on the correct installation of systems to lessen their visual impact and make it possible to use solar thermal in historical towns and other sensitive environments. The latest Comuni Rinnovabili reports 115 municipalities providing such instructions, usually covering PV as well.
Lastly, some municipalities – such as, again, Rivoli – have introduced simplified approval procedures for buildings subject to very specific restrictions concerning their cultural or natural heritage. As best practice, Contursi Terme (Campania region) does not impose severe limitations on installing solar thermal systems if the collectors in question have the same inclination and orientation as the roof.
2015 to 2017: Solar thermal growing
In 2015, solarthermalworld.org had already published a news article on Comuni Rinnovabili. Here is how 2015 compares to the latest edition of the report:
2015 to 2017: Solar thermal is growing. The table compares the 2015 and 2017 figures from the report.
Source: Legambiente
Legambiente is a non-profit organisation founded in 1980, with the mission of putting environmental concerns at the forefront of the agenda and improving the well-being of all citizens. The organisation’s headquarters are in Rome and its members consist of 20 regional branches and more than 1,000 local groups.
Websites of organisations mentioned in this article:
Comuni Rinnovabili: wwwcomunirinnovabili.it
Legambiente: http://www.legambiente.it
GSE: http://www.gse.it
https://solarthermalworld.org/wp-content/uploads/2017/08/rapporto_2017.pdf