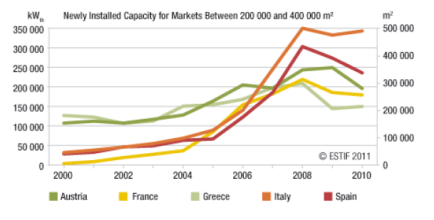 Several well-known speakers shared their market figures from key solar thermal markets worldwide with the audience of the Global Solar Thermal Markets session at the Intersolar Conference at the beginning of June. Whereas India and Brazil maintain high growth rates, the European solar heating and cooling sector has to again cope with a decline of now 13 % in 2010 compared to the previous year. The chart shows the developments of markets with a volume of 200,000 and 500,000 m2. It is part of the 16-page brochure “Solar Thermal Markets in Europe”, which the European Solar Thermal Industry Federation (ESTIF) presented at the Intersolar.
Figure: ESTIF

Pleasing is the development of the Italian market: According to a new market survey, the country fortified its position as the second largest market in Europe, increasing by 3 % in 2010. Likewise, Greece was able to record a small increase of 4 % in 2010, despite the country´s financial problems. Surprisingly, with 21%, Austria shows the largest drop in this country group, in spite of the fact that the country successfully managed the global financial crisis in 2009. Spain declined for the second time in a row, and is now close to its level of 2007, with a newly installed solar thermal capacity of 236 MWth. Solar thermal systems in the multi-family housing sector are still a growing business in France Metropole (mainland), whereas the residential sector is decreasing. This has led to another slowdown of the market by 3 % in 2010.

Altogether, 2.6 GWth were newly installed in the 27 European member states and Switzerland. According to Robin Welling, President of the European Solar Thermal Industry Federation (ESTIF), there are 32,000 full time jobs in the sector, which generated a turnover of EUR 2.6 billion.
Among the Eastern European countries, the market in the Czech Republic performed extremely well last year due to a 50 % subsidy scheme for the residential sector. Between January and 25 October 2010, 47,000 applications were submitted, of which 27,000 have been approved. The market grew by 66 %, from 51,670 m2 in 2009 to 86,000 m2 in 2010.

The Polish market had to record a disappointingly small increase of only 1 %, despite the start of the country’s first residential incentive programme in August 2010. “The small increase is thought to be the result of prematurely announcing the programme (therefore, inhibiting sales), its slow start, and the perceived complexity of the process,” ESTIF argues in its brochure. The PDF of the market statistic summary can be downloaded from the association´s website (http://www.estif.org).

The Indian solar thermal market has grown in recent years (62 % per year since 2001). The figure shows the annually installed collector area in India as per the Federal Ministry of New and Renewable Energy (MNRE). The fiscal year in India lasts from 1 April to 31 March the following year.
Source: MNRE

“The technical potential for solar heating and cooling technology in India is 40 million m2. However, only 4.5 million m2 have been installed by now,” Jaideep Malaviya, CEO of the Solar Thermal Federation of India (STFI), emphasised. More than 75,000 skilled and semi-skilled employees work in the country’s solar heating and cooling sector today. 63 flat plate collector manufacturers approved by the Bureau of Indian Standard (BIS) share 75 % of the total market volume. 25 % of these are vacuum tube collectors, which offer systems with tubes imported by almost 100 suppliers. The main drivers of market development according to Malaviya are rising energy prices, the direct cash subsidies for residential systems, and the installations on upcoming constructions made mandatory through building bye-laws.

The Brazilian solar industry association DASOL/ABRAVA started to differentiate between glazed and unglazed collectors in 2007. The pool heating market has developed far more dynamical than the glazed collector segment. The statistical separation of the two technologies did most likely not work out as perfect as it should in the first year of the new statistics.
Source: DASOL/ABRAVA

The Brazilian flat plate collector manufacturers enjoyed a growth of 21 % in 2010 due to the social housing programme My Home My Life (Minha Casa Minha Vida). According to the presentation of Carlos Faria, President of Brazilian consultancy SE-Studio Equinócio, 40,000 houses with a solar water heater were constructed for low-income families in 2010. “For families with monthly earnings of 1 to 3 minimum wages, the government subsidises 100 % of the solar thermal system costs, up to Brazilian Real (BRL) 1,800 (USD 1,100),” explained Faria. The programme is financed by the Brazilian economic stimulus package approved in 2007. For families with monthly earnings above 3 minimum wages, the solar water heater is financed through a long-term loan on the house.