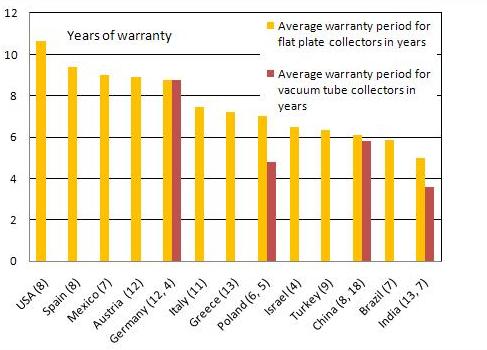 “How long is the warranty period of your flat plate or your vacuum tube collector?” This question was posed as part of a global solar thermal industry survey to 300 collector manufacturers from 40 different countries. Figure: solrico

The average warranty period for plate collectors was 7.4 years, whereas producers of vacuum tube collectors gave only an average 6 years of warranty. What was more interesting, however, was the look at average warranty periods in different countries. The difference here was even greater, as can be seen with the figure above. Countries are listed where four or more manufacturers participated in the survey.

American manufacturers take the lead position by giving a customer more than ten years of warranty on flat plate collectors. Spanish manufacturers rank second (average: 9.4).Eight companies from each the US and Spain participated in the survey. You can see their respective figures in the brackets to the right of the company name.

Collector producers in Germany, the leading solar thermal market in Europe, do not differ in their warranty periods for flat plate and vacuum tube collectors (an average 8 years). China, Brazil and India, in contrast, are the bottom three of the list. The vacuum tubes assembled in China and then sold on the Indian market come with the lowest warranty periods of all countries (average 3.6 years). 13 flat plate collector manufacturers and 7 vacuum tube assemblers from India filled out the questionnaire, with the latter enterprises being partly identical to the former.

You can download the results of the study on the website of solrico. It is one of the most comprehensive, publicly available overviews of the global solar thermal industry today. The report displays three different world maps, including factories of 200 flat plate and vacuum tube collector manufacturers. You can download them separately if necessary.