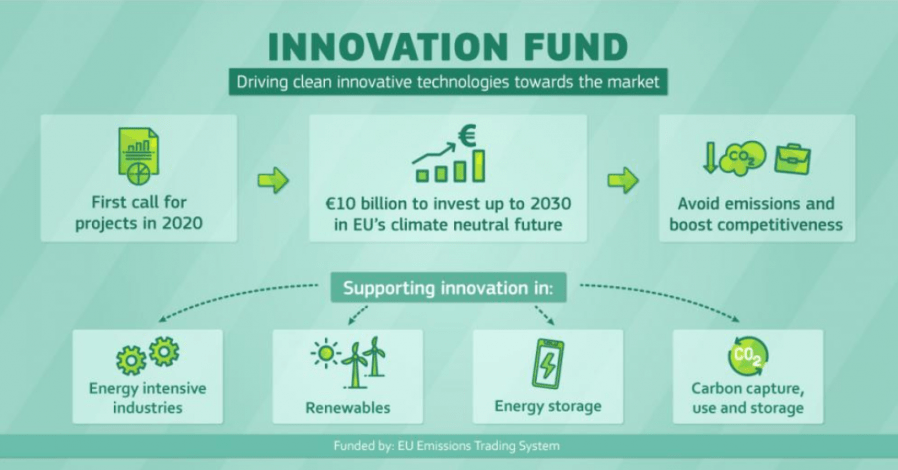 In July, French NewHeat was revealed to be among the 32 organisations whose applications were approved by the new EU Innovation Fund for small-scale projects. The EUR 4.5 million the company will receive from the fund will cover more than half of the total investment in a 20 MWth industrial solar heat (SHIP) system in Croatia, expected to cost about EUR 7.5 million. The system will be built at a Croatian malt plant, where it will preheat the air used for drying malt. Once completed, it will be the largest SHIP installation in Europe and easily outperform the 10.5 MW plant for greenhouse heating in Nibbixwoud in the Netherlands and the 10 MW system currently in operation in Issoudun, France.
Chart: EU Innovation Fund
“We’re extremely proud to have been chosen for a programme as difficult to get approved for as the Innovation Fund. The fund recognises the key role renewable heat can play in tackling climate change,” Hugues Defréville was quoted as saying in a press release in early September.
NewHeat came up with a design that combines a solar field with a 4,000 m3 storage system and two types of heat pumps, to ensure energy from the sun will meet 50 % of the process heat needs of the factory. Starting in 2023, the installation is said to supply about 20 GWh of heat while lowering CO2 emissions from the factory by around 4,000 tonnes.
EUR 118 million for 32 projects
NewHeat’s Croatian project was the only solar thermal venture to be approved during the first call for small-scale projects. According to a 27 July press release, the European Commission has set aside EUR 118 million to support a total of 32 projects that will employ a wide array of technologies. They include eight projects for electric storage, four for hydrogen, two for waste heat in industry and one project for geothermal energy (see the table for download below).
NewHeat is now drafting the grant agreement. The commission expects this phase to end for all projects in the fourth quarter, to have ample time to award and start disbursing the grants. Projects then have up to four years to reach financial closure.

Narbonne, southern France, now receives thermal energy from a 3 MW solar district heating plant that came online this month.
Photo: NewHeat
Heat delivery contracts for 23 MW capacity in France
The SHIP plant in Croatia is NewHeat’s first project outside France. “Within three to four years, non-domestic projects will most likely make up a major share of our business, and we are fully prepared for that,” said Defréville. Since its founding in December 2015, NewHeat has signed solar heat delivery contracts with four large energy consumers in France:
All four systems are or will be run by NewHeat. When it comes to the two solar district heating plants in Pons and Narbonne, the company sells the solar heat to Dalkia, a subsidiary of French utility EDF. That subsidiary then provides heat produced from a mix of energy sources to both cities. In both cases, the heat delivery contract has been signed by NewHeat, Dalkia and the city receiving the energy.
The largest project completed so far is a 10 MW plant developed in partnership with French project financer Kyotherm for Malteries Franco-Suisses in central France. In this case, the heat supply contract has been signed by Kyotherm and the client only. NewHeat, on the other hand, operates the plant, which will be officially inaugurated on 20 September.
In Croatia, however, the company wants to design, build, finance and operate the new 20 MW system on its own. “For the moment, we’re planning to fund the Croatian project ourselves. But we might ask minority investors to join the venture at a later stage,” said Defréville.
Second Innovation Fund call expected for October
Meanwhile, the European Commission has already announced plans for a second round of the Innovation Fund. A call for large projects with investment costs above EUR 7.5 million will be launched on 26 October, while the second one for smaller projects with capital costs ranging between EUR 2.5 and 7.5 million is scheduled for March 2022. The money will again cover up to 60 % of the added capital and operating costs of large ventures, to be chosen in a two-step application process, and up to 60 % of the capital costs of smaller endeavours, for which there is a shorter, one-step application procedure.
In total, the Innovation Fund will have a 2020 to 2030 budget of EUR 20 billion, supported by the proceeds from auctioning off 450 million in emission allowances for the same period.
Organisations mentioned in this article:
https://newheat.com/
https://www.dalkia.fr/en
https://ec.europa.eu/clima/policies/innovation-fund_en