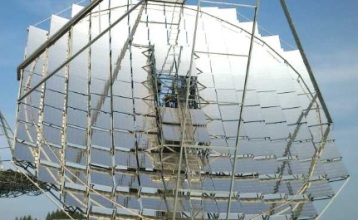 Within 18-month time, the first solar concentrator system with Arun Dishes has been installed successfully on a hotel roof in India. Indian company Clique Solar began to set up the solar steam installation at ITC Maurya Sheraton, New Delhi, in November 2009. The ITC hotel group is a “green” luxury hotel chain. Total project costs, including installation, amounted to around INR 8.5 million. The Ministry of New and Renewable Energy contributed INR 2.4 million in subsidies to it. Taking the 30% grant into account, the investment will pay back in 5 to 6 years. The photo shows an Arun Dish system with an aperture area of 160 m² (mirror area), which concentrates the sunlight in one point.
Photo: Clique Solar

Clique Solar introduced the Arun Dish back in 2006. According to manufacturer’s information it is the first dish concentrating collector to be certified by the Indian Boiler Regulations (IBR). The system consisting of Fresnel parabolic mirrors reaches an energy output of between 0.5 – 0.6 million kcal on a normal sunny day in India. This corresponds with a solar yield of 581 kWh/day produced by 320 m² of mirror area. The installation at the Sheraton hotel uses two ARUN 160 to generate steam for the hotel’s laundry, cooking and other heating requirements. The solar generator was added to an existing oil boiler.

One dish was mounted on top of the existing banquet hall, the other one was set up in the backyard of the hotel, streching over an area of less than 3 m x 3 m. The hotel’s technicians solved upcoming challenges with help from system supplier Clique Solar. The dish follows the sun on two axes. The receiver coil in the centre of the dish converts the water circulating in it into steam at 175°C and a pressure of 8 bar. The following figure shows how the solar steam & hot water system is integrated into the hotel’s energy system.

At the beginning of each day, the dish takes water from the cold water tank. As soon as it reaches a temperature of 175°C and a pressure of 8 bar, the produced steam is fed into the common header. From there, the steam will be distributed to the different locations. In the absence of sun, the existing oil boiler will feed steam to the common header.