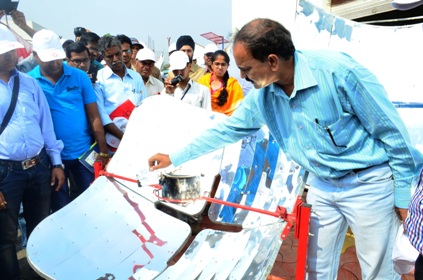 Indian organisation Prince – Promoters, Researchers and Innovators in New and Clean Energy – is offering training workshops on residential and institutional solar cooking to new entrepreneurs who manufacture or trade solar cooking systems. PRINCE has already conducted more than twelve workshops, and according to the organisation, more than 60% of the solar dish cooker manufacturers and suppliers registered with the Indian Ministry of New and Renewable Energy (MNRE) have benefitted from PRINCE’s training courses. The photo shows Professor Ajay Chandak, founder of PRINCE and Board Member of the International Solar Energy Society (ISES), demonstrating an improved cooker model during a workshop in February 2015.
Photo: Prince
“We realised that the best way to promote renewables is to develop entrepreneurs who will earn their bread and butter through green business opportunities,” Chandak, who founded PRINCE in 2000, explains. “We launched the training programme in 2012 on behalf of the MNRE, which felt that there were too many issues with the installation and commissioning, as well as the operation and maintenance of Scheffler-type concentrators.” The MNRE authorised PRINCE to provide training to new entrepreneurs and their staff from all across India. The workshops are partly paid for by participation fees and partly by public money.
Solar cookers for border security forces in desert regions
The most recent training session concluded in February 2015 saw the record number of 56 participants arriving from all corners of the country. The session provided field demonstrations of various solar thermal cooking models developed for domestic and community use. Ankit Ramoliya, an engineer and a first-generation entrepreneur from Surat in Gujarat state, thought the workshop to be a good forum for meeting like-minded people. “The training session offered me great networking opportunities, which was the biggest takeaway,” Ramoliya said, satisfied.
The workshop introduced an improved solar cooker with 4 m2 of aperture area (see the photo above). It is suitable for midday meals in schools and for border security forces in desert regions. Chandak said he had modified the design so as to precisely focus the solar rays on the pot at all times, and he claimed that his system offered better efficiency than a Scheffler cooker. In addition, the new models have chamfered edges, which gusty winds cannot deform.
India has over 1.2 million rural schools at which lunch needs cooking, and PRINCE plans to focus its training sessions on exploring entrepreneurial opportunities, so that solar thermal can supply part of the required cooking energy. Similarly, it would like to train the defence personnel posted at national borders in maintaining solar cooking systems.
More information:
http://www.princeindia.org
This text was written in cooperation with Jaideep Malaviya, an expert in solar thermal based in India (malaviya@solrico.com).