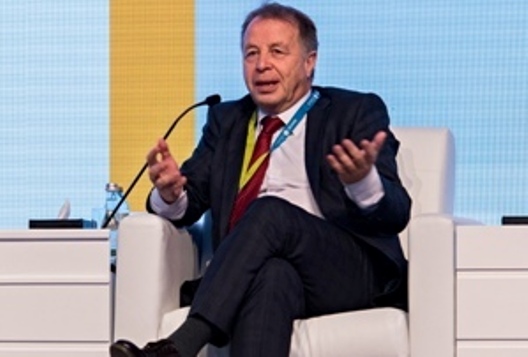 The industrial sector is the hardest to decarbonise. “Stakeholders are in fierce competition, so to adapt any source that is even slightly more expensive than the fossil fuels they are used to is difficult,” Cédric Philibert, Senior Analyst in the IEA Renewable Energy Division, said during the panel discussion The Road to 100% Renewable Energy at the joint SHC and SWC 2017 conference in Abu Dhabi in early November. He presented key findings from his most recent Insight Paper, Renewable Energy for Industry, which takes a closer look at cement manufacturing, iron- and steelmaking and chemical production (see the attached document).
Photo: Masdar Institute at Khalifa University of Science and Technology
“Solar electricity and wind power at 3 EUR ct/kWh and below enable new options for greening the industry, starting with green ammonia for producing nitrogen fertiliser, then for green steelmaking,” Philibert explained. The analyst recommends the production of green ammonia and hydrogen in regions where solar resources are in abundance – such as Australia, the Horn of Africa, North Africa, northern Chile, southern Peru, South Africa, several regions in China, and the Midwest in the United States – and their shipment to large industrial centres to create new types of global energy trading.

Solar thermal capital costs based on temperature and plant size according to an Australian study called Renewable Energy Options for Australian Industrial Gas Users.
Source: Renewable Energy for Industry, p. 18
In his paper, Philibert also underlines that “heat represents three-quarters of industrial energy demand worldwide, and half of it is low to medium-high temperature.” He quotes a recent IEA scenario, which projects global CO2 emissions from industry to grow by 24 % between 2014 and 2050. The low-hanging fruit seems to be the food and beverage, textile and service industries, which mainly require low-temperature heat. In addition, Philibert sees promising solar steam developments for “heavy oil fields and in refineries.”
In the last chapter, the IEA analyst briefly discusses the policy options most favourable to faster and more extensive renewable uptake at manufacturing companies. In his view, the best solution would be globally coordinated carbon pricing, which is highly unlikely to materialize for political reasons. He acknowledges the influence of “green procurement as the most realistic short-term option,” and observes that “many developers and manufacturers are now turning their attention to the ‘grey energy’ embodied in their products and are procuring preferably cleaner materials.” His conclusion: “It is not likely that the procurement of green materials will scale up sufficiently, but it could offer a solid basis upon which to develop new processes based on the widespread substitution of renewables for fossil fuels.” Page 7 of the document lists additional policy options which are key to increasing the deployment of solar process heat technologies:
Websites of organisations mentioned in this article:
https://www.iea.org
https://solarthermalworld.org/wp-content/uploads/2017/11/iea_renewable_energy_for_industry.pdf