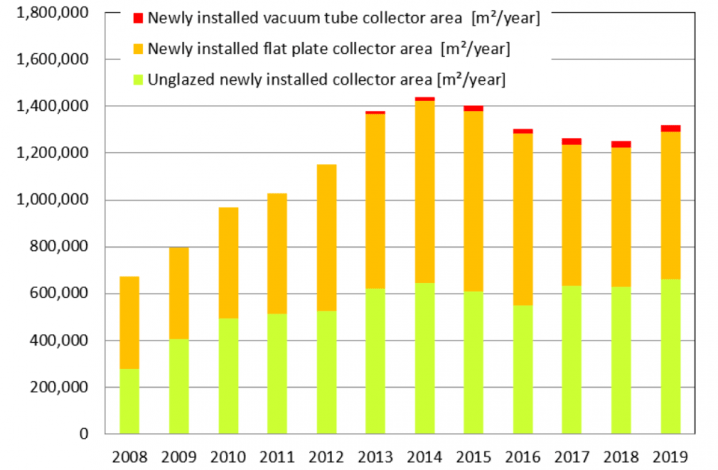 The solar thermal market in Brazil grew by about 6 % in 2019, adding 1.32 million m2 (0.93 GWth) despite a turbulent economy. The surge came in part due to new commercial customers that require large quantities of hot water and followed four years of steadily declining sales. Owners of hotels, spas, fitness centres and beauty salons, among other establishments, see solar heating as a means to cut operating costs and increase competitiveness. Regular surveys conducted by ABRASOL, Brazil's solar thermal association, are used to compile the national market statistics. Click here to find the market report for the period up to 2017: https://www.solarthermalworld.org/news/new-brazilian-government-has-no-a...
Chart: ABRASOL
According to Oscar de Mattos, President of ABRASOL, owners of residential buildings remain the most important target group for solar thermal systems nationally, buying about 65 % of all new installations. And yet, every year, growth in the commercial and industrial sectors is getting ever more noticeable. In his view, this is because customers are continuously looking for ways to save on resources and lower costs: “As an example, in the hotel business and gyms including swimming pools, the hot water needed for showers and pools is responsible for a large portion of the total costs. A few years ago, when there was less competition, I guess that such businesses did not care as much about reducing expenditures as they do today.”
Gain competitive advantage via solar heat
Carlos Artur Alencar, CEO of solar thermal manufacturer and project developer Enalter, noticed last year’s surge in demand from hotels too. “The popularity of solar energy is growing among commercial clients. Every day, it becomes ever more obvious that solar heat is a suitable way to gain a competitive advantage,” he said. According to Alencar, solar water heaters are now used frequently in multi-family properties and hotels in more mature markets, for example, the state of Minas Gerais. In the Mariana municipality, where multiple villages are being rebuilt after a dam ruptured, all new buildings, be they residential units, schools, fitness centres or health clinics, come with solar thermal solutions. 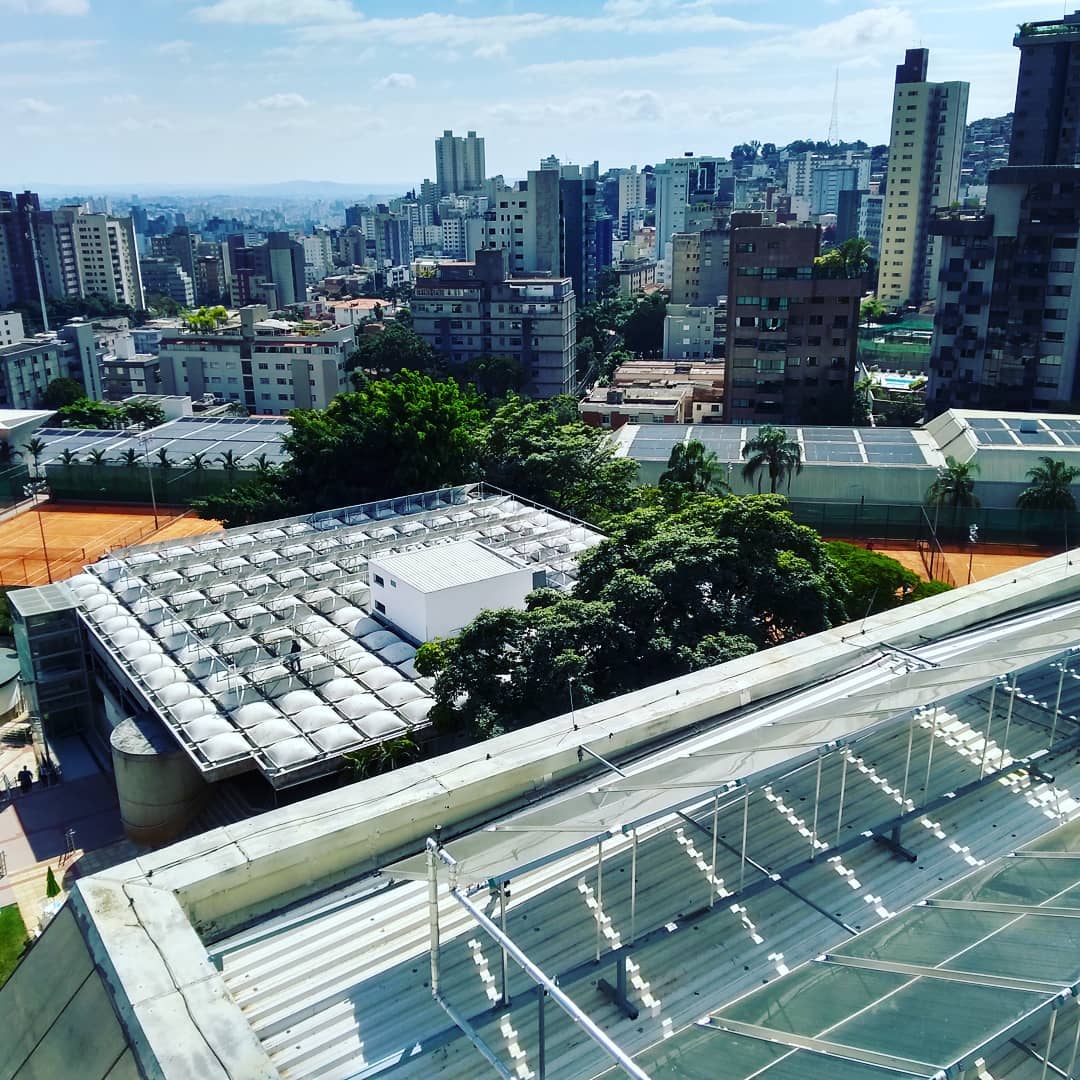 Solar collectors mounted on the roofs of the neighbouring buildings provide hot water for the showers and the pools in the Minas Tênis Clube II sports club in Belo Horizonte.
Photo: Enalter
High expectations for second half of 2020
In the survey carried out during the first quarter of this year, before the pandemic began to take hold, ABRASOL’s members assumed steady growth in 2020. But Covid-19 caused demand to fall, especially because commercial clients put their plans on hold and wholesalers closed their doors so that residential clients had little option to buy a solar water heater.
The pandemic also led to the stop of two policy support programmes. Up until March 2020, ABRASOL had worked, hand in hand with Brazil’s mines and energy ministry, on the development of Pró-Sol, a federal programme to promote the use of solar energy across the country. The programme was then halted because of Covid-19. For the same reason, the government also put the brakes on Casa Verde e Amarela, the social housing scheme that was to succeed Minha Casa Minha Vida, the main driver behind the increase in solar thermal capacity between 2009 and 2014.
Rely solely on economically viable solutions
With no direct government support besides a VAT reduction, Brazil’s solar thermal market must now again rely solely on economically viable solutions.
However, despite Brazil’s political and economic issues, people have high expectations for the second half of this year. Mattos said “the residential sector has recovered to some extent and the market has been on the rise again since August, so we are pretty optimistic about the number of systems we will be able to sell until the end of the year.”
Alexandre Moana, CEO of energy efficiency company Energias, also believes the market will rebound. He noted demand was down in the first six months of the year, but reopening the economy has given many commercial clients an opportunity to resume their search for solutions that could give them a competitive edge.
Moana added that an announced policy change could favour the solar thermal market as well: Owners of PV installations will have to pay energy distribution costs per kilowatt-hour of solar electricity that they feed into the public grid. “Photovoltaic systems have been promoted a great deal since 2015, but charging distribution costs will again tipp the scales in favour of solar thermal, creating new momentum in the sector,” he explained.
This article was written by Leticia Sother, a Belo Horizonte-based freelance journalist who holds a bachelor’s degree in architecture.
Organisations mentioned in this article:
https://www.abrasol.org.br/
http://enalter.com.br/
https://energias.com.br
News
Domestic Hot Water and Heating
Finance and Incentives
Brazil
Solar Payback
Minha Casa Minha Vida
social housing programme
market opportunities
Enalter
ABRASOL
Energias