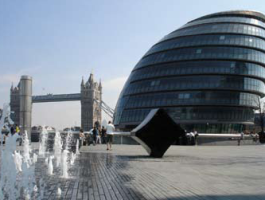 The UK currently holds the attention of the world with two government solar subsidy schemes – one for PV and one for solar thermal. The conference Solar Industry Summit – UK 2011, organized by the German company Solarpraxis in the middle of May in London, combined the interest of both technologies. Many are wondering which subsidy and which technology will win in the end – so far the PV feed-in tariff is the first in the race.
Photo. Free Spirit Fotolia

The Solar Thermal session focused on the Renewable Heating Incentives (RHI) and was chaired by Xavier Noyon, Secretary General of the European Solar Thermal Industry Federation (ESTIF) and the session was started by Howard Johns who is chair of the Solar Trade Association. Here we heard initially that the UK has up to 20,000 solar domestic hot water systems (SDHW) fitted per year mainly for households which provide an annual gross collector area of around 60,000 m2. Howard Johns then continued to explain the long saga of the RHI development and the frustration of the industry about the delays in the implementation. Currently the UK SDHW market is in static.

The background information: The RHI has not properly started yet in the UK but a small grant is proposed for households possibly around Pound Stirling (GBP) 300 per system called the Premium Heat grant. The government will announce details of this end of May 2011. This is intended to help sustain the market until the RHI tariffs starts but there is low anticipation that this incentive will work well enough. It is likely that this grant will only be available if the householder first insulates, as announced in an official press release of Department of Energy and Climate Change (DECC) from 10 March (see also http://www.solarthermalworld.org/node/2845). The UK solar industry thinks this is unfair as energy saving measures for water is independent from space heating.

In his speech Johns explains that the Premium grant also requires the system user to agree to give feedback to the administration on how the equipment performs to gather more information about solar thermal performance. He expressed concern that it is not clear yet, how this so called ‘deeming’ will effectively being used to guess energy contribution for the final RHI tariffs because household systems are unlikely to be metered. There will be a government RHI tariff consultation later 2011 and the tariffs expected announced later in 2012. For non-household systems up to 200 m2 gross collector area the tariff are expected to start in July 2011.

Russell Gore, UK Sales Manager of the Irish vacuum tube collector manufacturer Kingspan Renewables, discussed the UK metering and meeting the RHI requirements. The speaker indicated an industry preference for a household tariff figure at least around 0.159 GBP/kWh or even as high as 0.18 GBP /kWh of generated heat which might then make a similar return on investment to the current PV feed-in tariff. He calculated that with these tariffs each householder might potentially receive annually between GBP 100 to 300 RHI per 2 – 4 m2 SDHW collector system. However this is not yet formally agreed. Meanwhile the figure of 0.085 GBP/kWh is presented by the government for non-household systems

Gore also emphasised that the RHI tariffs are to be index linked to inflation. The Kingpan’s Sales Manager pointed out that it was important to him that the tariffs responded to the different system performances for example between those using flat plate and vacuum tube collectors.

Finally, Iain Summerfield of the UK training and consulting company Gastec at Cre provided technical details of the necessary metering for commercial RHI. In fact he advocated that also domestic should be metered using equipment meeting Class 2 Annex MI-004 of EU Measuring Directive (MID) for accuracy. However these would need regular recalibration every few years or be replaced. He acknowledged that heat meters for solar thermal are difficult to select and locate due to glycol and water contaminates. Summerfield suggested that metering costs would be up to 25 % of the capital expenditure for small systems but less than 5% of large systems. Costs were typically between 2 to 10 GBP/kW installed.

Questions from the audience included why air collectors not included in RHI even though measurement possibilities exist and why the UK make it so difficult for solar thermal and is so far behind Europe ?

The lessons learned from the discussion included that: