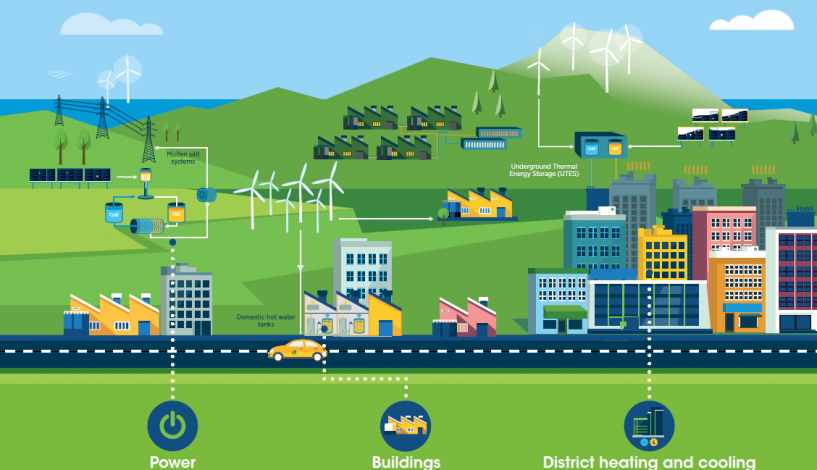 There is a broad consensus that solar thermal storage has the potential to be an important driver of decarbonising energy systems around the world. Thermal energy storage, or TES for short, denotes technologies that make it possible to decouple energy generation from demand or move demand for heat to periods promising low electricity prices. In its latest Innovation Outlook report, the International Renewable Energy Agency (IRENA) discusses TES heating and cooling use cases, policy-related challenges, and innovation needs in the coming decades (see pdf for download below). It is the sixth iteration of Innovation Outlook, with prior reports focusing on Ocean Energy Technologies (December 2020), Smart Charting for Electric Vehicles (May 2019), Advanced Liquid Biofuels and Offshore Wind (both October 2016), and Renewable Minigrids (September 2016).
Source: IRENA
The report’s authors expect the global TES market to triple in size by 2030. This would mean an increase from an operational storage capacity of 234 GWh in 2019 to more than 800 GWh 10 years later. Today, there are two technologically mature TES designs: One uses hot water either stored in tanks or underground to provide heating and cooling; the other, known as molten-salt storage, is commonly deployed in combination with CSP plants. The latter is said to experience an enormous capacity increase over the next years and jump from 21 GWh to between 491 GWh and 631 GWh. The authors further recommend increasing the number of TES demonstration projects for all parts of the energy system, in order to make stakeholders better aware of the benefits of these technologies. As a starting point, the report includes 12 case studies illustrating several TES technologies (including those in the prototype stage) and their impact on the energy sector.

Infographic illustrating current TES deployment numbers in the heating (198 GWh), space cooling (14 GWh) and the power (21 GWh) markets and their growth rates.
Source: IRENA
Another important item on the agenda, the authors write, will be to invest in more research and development, to help make some technologies such as high-temperature phase change materials and salt hydrate thermochemical storage tanks fit for the mass market. Chapter 3 of the report goes into great detail about 13 TES sub-technologies, which are grouped into four categories: sensible, latent, thermochemical and mechanical-thermal storage.
Several tables in the first section, Insights for Policy Makers (pp. 16 to 32), present readers with an in-depth overview of all relevant TES technologies in a certain market, be it power generation, manufacturing, refrigeration, housing or district heating and cooling (see the following chart). These tables include a range of efficiency and cost values for relevant TES equipment, as well as its economic life and operating temperatures.