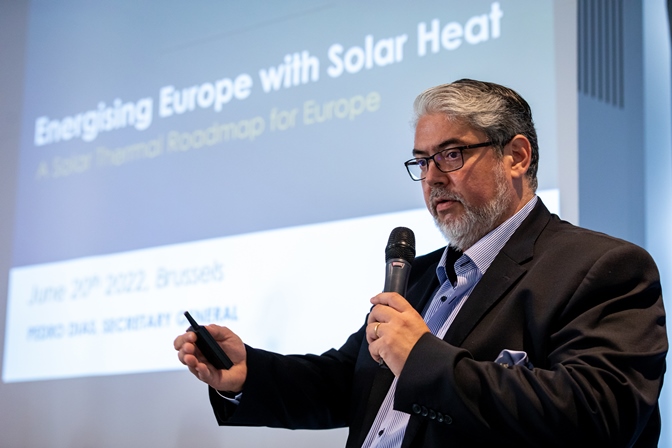 By 2030, solar heat is expected to reach 140 GW of installed capacity in Europe – tripling the 36 GW in operation at the end of 2021. At the end of this decade the sector will have replaced 12.1 billion m3 of imported Russian gas and enabled more than 250,000 green jobs according to the Solar Thermal Roadmap that Solar Heat Europe launched on 20 June in Brussels. With its more than 100 small and medium-size solar thermal manufacturers and system suppliers in Europe, the industry can accelerate its efforts in decarbonising heat and increasing energy security. But dedicated demand-orientated measures are necessary to stimulate sales.
Photo: Solar Heat Europe

‘’What Europe is facing now is not a gas crisis, it is a heat crisis. Heat is half of the energy consumed in Europe and solar heat has a critical role to play in the response to this crisis and to the energy transition, as a clean, competitive, and reliable source of heat for European homes and industry,” stated Pedro Dias, Secretary General of Solar Heat Europe (SHE), during his presentation of the Roadmap on 20 June. The launch of the Roadmap was part of a high-level policy workshop in Brussels, the main event of SHE’s 30th anniversary celebrations. 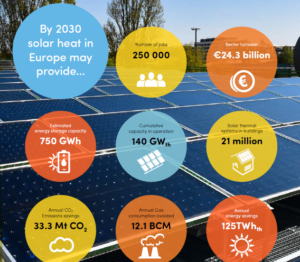 On 18 pages the Solar Thermal Roadmap for Europe highlights the advantages of solar thermal usage in Europe (see PDF for download below). It emphasizes the fact that the solar heat sector has a positive trade balance as 90 % of the solar thermal systems installed in Europe are supplied by local manufacturers and countries such as Austria and Greece export more than half of their solar thermal production.

The Roadmap predicts the highest growth in the field of solar industrial heat (SHIP). By 2030, 36 GWth of SHIP capacity could cover more than 10 % of the consumption of the food, drinks and tobacco sectors, which use predominantly low and medium-temperature heat. But demand-orientated measures are particularly important in reaching this ambitious target, said Dias.

The “Accelerated Deployment Programme for Industry” will include individual requirements for industrial companies to incorporate a higher percentage of renewables in their heat supply, for example 5 % by 2025 and 10 % by 2030. Additionally, the EU will create dedicated investment vehicles for renewable heat solutions and enhance the use of heat purchase agreements in parallel to power purchase agreements. 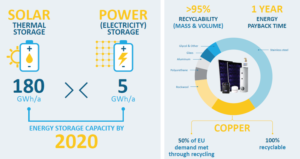 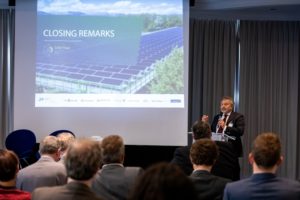 “It is critical to give the solar thermal sector the same level of political and financial support that has been offered to renewable electricity technologies,” stated Guglielmo Cioni, Vice President of Solar Heat Europe, during his closing remarks. Photo: Solar Heat Europe