Merging three individual conferences into the International Conference on Solar Technologies & Hybrid Mini Grids to Improve Energy Access was rewarded with a satisfying number of attendees visiting the latter. According to the organisers, 185 experts from 38 countries from all corners of the globe met in the small town of Bad Hersfeld near Frankfurt, Germany, in mid-September 2016 to talk about all the technology and market requirements for increasing solar deployment in developing countries. The conference schedule was, of course, fairly focused on photovoltaics, but Southern Africa was well represented, as experts from the partner countries of SOLTRAIN (Southern African Solar Thermal Training and Demonstration Initiative) presented their work during the event (see photo).
Photo: OTTI
These experts from South Africa, Namibia, Lesotho, Mozambique, Botswana and Zimbabwe pointed to the great importance of solar water heaters as an electricity-saving measure in their countries. “The regular power cuts in South Africa lower the GDP by 1.1 %,” SOLTRAIN’s Project Coordinator, Werner Weiss explained in his opening speech. “As soon as households have access to the grid, they use up to 50 % of their electricity consumption for hot water.”
Four Namibian households were monitored to confirm the electricity saving from the use of solar water heaters. Three of them had a thermosiphon system with an electric element installed and one home features an electric geyser. The reason behind the monitoring is the plan of the Namibian government to oversee the construction of 185,000 newbuilds by 2030, which will prompt a massive increase in electricity demand. 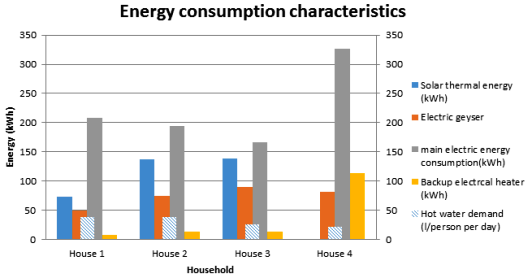 Power consumption in the monitored households in Windhoek, Namibia, averaged over five months (March to July 2016). Building 1 to 3 have a solar water heater installation, whereas number 4 is equipped with an electric geyser.
Source: Namibia Energy Institute
“The three houses with solar water heaters saved on average 99 kWh in electricity each month, and the backup electric heaters consumed on average 12 kWh during the same time,” Dr. Zivayi Chiguvare, Director of the Namibia Energy Institute (NEI) of the Namibia University of Science and Technology, explained in his presentation. “This means that the monthly saving is 89 % of the 111 kWh of total energy required for hot water preparation.” The now 62 solar thermal-equipped buildings in the Otjomuise township in Windhoek save 3,844 kWh in total electricity consumption. The results of the monitoring project provides ample justification for a high share of solar water heaters in newbuilds. 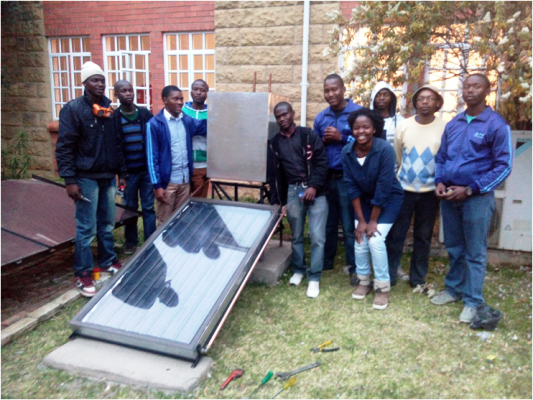 Students of the Department of Physics and Electronics of the National University of Lesotho (NUL) with their solar water heater prototype.
Photo: NUL
Low-cost and simple collector model
One of the main obstacles to a greater uptake of solar water heaters in the Southern African country of Lesotho is the systems’ capital cost, said Anadola Tsiu. Supported by his students, the laboratory technician from the Department of Physics and Electronics at the National University of Lesotho has designed, built and tested a prototype of a 50-litre solar water heater system which is suitable for low-income households, particularly in remote rural areas. The 1.35 m² collector is insulated with raw sheep wool, equipped with a galvanised, 1 mm thick copper absorber and covered by an ordinary window glass plane.
The monitoring results from a solar water heater installed in a rural household showed a maximum efficiency of 25 % at 11 a.m. and 20 % at 2 p.m. on selected days in August 2016. “Obviously, the efficiencies are much lower than those of conventional systems, and there is ample room for improvement regarding the design and/or the construction materials,” Tsiu concluded. “However, continued measurements have already shown that the system is capable of sustaining water temperatures above 40 °C at ambient temperatures of as low as 10 °C, which is acceptable for bathing and other household applications.”
Not too long ago, SOLTRAIN started into Phase III, which is scheduled to run between March 2016 and July 2019 and has a total budget of EUR 3.4 million. Botswana is said to become the sixth partner country of the programme.
Websites of institutions and projects mentioned in this article:
SOLTRAIN: http://www.soltrain.co.za/
International Conference on Solar Technologies & Hybrid Mini Grids to improve energy access: http://www.energy-access.eu/
Namibia Energy Institute: http://nei.nust.na/
National University of Lesotho: http://www.nul.ls/
News
Domestic Hot Water and Heating
Training and Education
Germany
Austria
Lesotho
Namibia
South Africa
Mozambique
Botswana
Zimbabwe
SOLTRAIN
International Conference on Solar Technologies & Hybrid Mini Grids to Improve Energy Access
OTTI
NEI
NUL
Namibia University of Science and Technology
National University of Lesotho