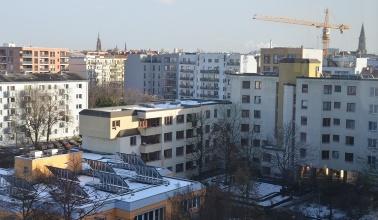 German company Parabel Energiesysteme has set up solar thermal systems with collector areas between 20 and 220 m² on, all in all, 450 buildings across Europe. More than 100 of these systems are part of a continuous monitoring programme. Their typical yield is 500 kWh/m² and year – impressively high for Germany. In January, a group of participants of the SMEThermal conference in Berlin, Germany, took a tour to a Parabel plant. The photo shows the area in the centre of Berlin where solar water heaters are placed on several roofs of the multi-family buildings as well as a kindergarten on the left.
Photo: Eva Augsten

“The hardest challenge for solar thermal is its bad reputation,” says Berhard Jurisch, General Manager at Parabel. In 2005, he started a first monitoring programme which was to prove that his solar systems performed as he had calculated. In 2009 and 2010, Parabel teamed up with the University of Applied Sciences HTW Berlin to develop an automated monitoring, which was ready for use in 2011.

All systems planned by Parabel will now be part of a monitoring programme during their first two years in operation in order to enhance their performance. Monitoring is done by remote from the company´s office in Berlin, so that even a small company such as Parabel with its 10 employees can handle the data load. The remote system is also used to advice installers on how to fix any problems with the collector installation on-site. In addition to the solar yield, monitoring also includes other relevant data, such as temperature and hot water consumption. The customer can trace the data online and display it graphically, but has only limited access to change any of the parameters. This is where the remote system comes in again, allowing the Parabel engineers to change the relevant settings from their office. Extended monitoring is available, too. It will cost EUR 10 to 60 per month, depending on the services required.

The Berlin-based residential housing cooperative Degewo runs 50 solar systems planned and monitored by Parabel. The plant which the SMEThermal group visited in January was the central heating for three buildings with one shared boiler. Each building has 60 apartments, its own heating sub-station from Parabel and its own solar plant with 60 m² of collector area. This design is fairly common for the plants in Degewo buildings.

There are several factors which facilitate the high solar output:

According to Parabel, all of these measures combined save, on average, 20 to 30 % in fuel. This includes savings due to an optimised hydraulic system, the solar system itself and usually also a new condensing boiler. Cost and fuel savings are distributed roughly equally among those measures.

Parabel mainly distributes its systems through big heating companies, such as Bosch Thermotechnik (with the brands Buderus and Junkers), but also in cooperation with solar specialist Solvis GmbH & Co. KG. In the region around Berlin, they also sell directly to installers.