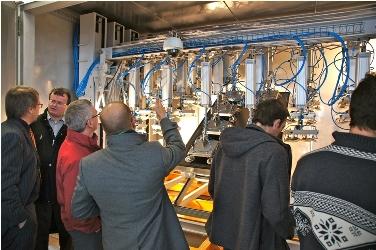 At the end of November, the Fraunhofer Institute for Solar Energy Systems ISE started its new test stand for solar thermal collectors. Using this test stand, the scientists aim to simulate mechanical loads under extreme climatic conditions, e.g., wind or snow, and analyse their effects on the solar collectors. The test stand is part of the MechTest project, which has been running at the Fraunhofer ISE with support from the German Federal Environment Ministry (BMU) since 2010. The scientists hope that the project will be able to determine the mechanical stresses put on solar collectors and their mounting systems by wind and snow in order to develop quality assurance systems based on these results.
Photo: Stephanie Banse

The Fraunhofer ISE and PSE AG, both located in Freiburg, Germany, have joined together to develop this special test stand for mechanical loads, which has been incorporated into a climate chamber. According to the scientists at the Fraunhofer ISE, the test results should provide the necessary input for new test procedures and improve the quality and safety standards of solar thermal collectors in the end. The test stand could open up new possibilities in analysing new materials and system improvements under real-life conditions in order to save costs for collectors and mounting elements.

“There has been an increasing number of large solar installations around the globe. At the same time, the requirements for security, manageability and efficiency have also increased,” MechTest project coordinator Konstantin Geimer explained at the opening ceremony in November. “Our goals are to categorise different important load cases, to develop simpler test procedures and to harmonise them as well.”

With the new test stand, the Fraunhofer ISE can follow up on complex questions about the mechanical stability of solar thermal collectors, including their mounting system for roof and facade. The test stand’s 24 pneumatic cylinders with four suction cups each allow the scientists to assess collectors of up to a maximum of 9 m2 and loads of up to seven tons of push and pull. In addition, they can now carry out mechanical load tests in a temperature range from -40 °C to +60 °C. The stand also enables the Fraunhofer ISE to simulate cyclical, as well as asymmetric loads, such as different snow loads on several parts of the collector surface. ”We see a large potential for the new test system,” says Korbinian Kramer, Group Leader of the test centre and Quality Assurance Manager at the Fraunhofer ISE. “The new test stand enables a more detailed investigation of the joining techniques and the mounting system under different temperatures and realistic load scenarios. This is a decisive advantage over established test procedures, in which loads are merely applied perpendicularly and at room temperature.”

There were many challenges to overcome during the joint development and manufacturing of the new test stand by PSE AG. ”The requirements for the test stand were very complex: for example, high flexibility with regard to possible loads and, at the same time, very large mechanical loads. We employed a lot of technical ingenuity in order to implement all the degrees of freedom necessary for the load tests,” Frank Luginsland, Head of the Technology Department at PSE AG, explains in a press release.

With a staff of 1,200 people, the Fraunhofer Institute for Solar Energy Systems ISE is one of the biggest solar energy research institutes in Europe. The Fraunhofer ISE has pledged to promote energy supply systems which are sustainable, economical, safe and socially just. The institute also has numerous accredited test facilities. PSE AG was established in 1999 as a spin-off of the Fraunhofer ISE and currently has a staff of 65. The company provides highly specialised solar test systems and solar consulting expertise to customers around the world.