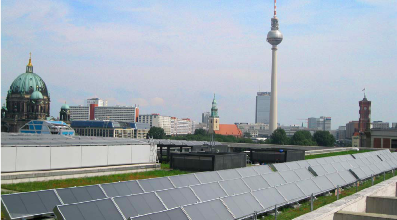 Since December 2011, a total of 81 solar air collectors by German manufacturer Grammer Solar have supplied the Ministry of Foreign Affairs in Berlin with sun-heated air. The air collector system is part of an energy savings contract that the Ministry of Foreign Affairs has drawn up together with the German Energy Agency (dena) and the energy efficient building specialists of YIT Germany GmbH in 2011. The overall aim is to save more than EUR 600,000 in operation costs and around 1,780 tons of CO2 emissions per year.
Photo: Grammer Solar

The existing absorption chiller system was replaced by a turbo-compression chiller and the radiators of one building unit were equipped with individual room controls. The sun-heated fresh air is delivered by a 203 m² air collector system, which was mounted on the flat roof of the building’s new annex and connected to the existing ventilation system.

The nine collector fields of the JumboSolar GLK air collectors can heat up to 18,000 m³ of fresh air per hour, which corresponds to a nominal capacity of 136 kW. Each collector field consists of nine panels which have been connected in series. The first collector is equipped with an air filter, and the last one provides the link to the ventilation system. Each panel has a galvanised casing containing a black-coloured high-performance aluminium absorber that appears ribbed on its surface. The collector itself is insulated with a 60 mm thick mineral wool layer and the cover is made of 4 mm highly transparent solar safety glass.

“Our JumboSolar collectors are a very appealing choice for large-scale system designs, because they operate with a much simpler technology than water-based systems,” says Rudolf Ettl, Head of Solar Air at Grammer Solar. “The plant in Berlin just had to be connected to the existing ventilation system. Another of the system’s advantages is the possibility of generating energy even at low temperatures – for example, when heating air from 0 to 10 ° C.”

Using the solar air collector system is expected to save 72 MWh/a – equal to 21 tonnes of CO2 per year. The solar energy is said to cost 0.082 EUR/kWh (factoring in a 20-year plant lifetime and a 4% interest rate). “The energy costs were calculated based on the system staying in operation for 20 years,” explains Ettl. “The life-cycle of an air collector system can reach significantly beyond that limit. The oldest of our plants have been in operation for over 30 years.”

All JumboSolar collectors comply with the requirements of EN 12975. This standard for water-based panels is currently being revised to incorporate solar air technology. An updated version is expected to come into force in early 2013.

“By retrofitting its own buildings, the Ministry is showing that it is really committed to reducing emission values. It has also come to the conclusion that solar air technology can help to lessen Germany’s impact on climate change,” summarises Gerd Renner, Product Manager at Grammer Solar.