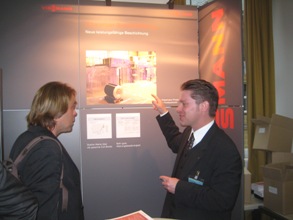 Viessmann manager Stefan Hirzinger (right) describes the company’s new coating as, “one of the best selective coatings available on the market”. The product passed the accelerated life testing under the name Task X.
Photo: Joachim Berner

At the beginning of May, Viessmann Werke GmbH & Co KG took the opportunity to demonstrate its in-house development of a selective solar absorber coating during the 20th Symposium for Solar Thermal Energy in Bad Staffelstein, Southern Germany. The German producer of heating systems is now one of the very few solar thermal manufacturers worldwide that has all of its production steps done at one and the same factory site in Faulquemont, France: From coating the absorber plate and laser-welding the absorber to manufacturing collectors and tanks.

“It is not our objective to apply the new coating to all of our solar absorbers, but instead we will stay with our multi-supplier strategy,” Product Group Manager Stefan Hirzinger said. Viessmann’s factory in Faulquemont has the capacities to cover half of the produced collector area with the company’s own coating. In addition, it is supplied from two other German coating specialists.

Viessmann began its own coating of absorbers in 2005 when the company bought a coating machine from a then insolvent German company. “The main challenge among our development efforts was not only to achieve the optical properties of comparable vacuum coatings, but to arrive at the same blueish appearance,” Hirzinger explained the following, long-lasting research period. Moreover, the team had to later adjust the coating properties to aluminium because the company changed the absorber material in 2008 from copper to the more competitive metal. In Bad Staffelstein, Hirzinger proudly presented the new coating with an absorption coefficient of more than 95% and an emissivity of less than 6%. He did not give detailed information on the specific coating technology and the structure of the coating, only that the material is sputtered onto the absorber coils.