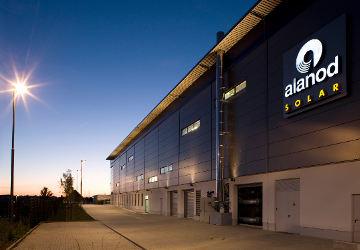 Since the end of March, the absorber production industry in Europe has had a fairly different look: As of 28 March 2014, Alanod has been the new owner of Bluetec. Both companies are well-known specialists for highly selective absorber coatings for the solar thermal collector industry. Besides providing coated aluminium and copper sheets, they also manufacture and supply highly reflective aluminium for the lighting industry.
Photo: Alanod

According to Ingo Beyer, CEO of Alanod, the initiative came from Bluetec management, which contacted Alanod at the beginning of March 2014 to offer the company’s acquisitionby the end of March. After negotiations that lasted for only a couple of weeks, both companies signed the sale agreement on 28 March 2014 – just two days before the international fair Light + Building started in Frankfurt (30 March to 3 April 2014).
An Alanod press release from 28 March 2014 stated that “Bluetec was unable to follow through with its growth strategy.” Bluetec tripledits production capacity four years ago by installing a second vacuum deposition line in a 4,200 m2 production plant and office building in the town of Eberschütz. The company had invested a double-digit million Euro sum in the new plant, primarily to process aluminium coils for the lighting industry, whereas the existing vacuum deposition line in the town of Bad Karlshafen focused on highly selective coatings for copper absorbers in solar applications. All of this happened in 2010, at the beginning of the European solar thermal crisis.
Closing down production capacities in shrinking markets
In addition, “LED as a light source for the future gained rapid acceptance and thus replaced traditional lighting solutions using reflector technology,” the Alanod press release names the two reasons why Bluetec’s business had not created the necessary turnover to repay the company’s investment. Accordingly, Beyer also justified the Bluetec acquisition with closing down production capacities in shrinking markets. “It was not a one Euro deal,” Frank Schoonen, Alanod’s Sales Director, confirms. “However, the price was fair and acceptable.”
None of the four former general managers of Bluetec could provide any more information on the merger. This might be because the sale agreement included a non-compete clause for the former management of Bluetec, so that any kind of statement regarding the situation of their former business might have been impossible for them.
The around 40 employees of Bluetec at the two company sites in Eberschütz and Bad Karlshafen were informed about the sale during an employee meeting at the same day the contract was signed. Following the signing of the contract, Alanod announced a halt of all business and production activities for the week. The shutdown was then extended for another week. “This break allowed us to evaluate our options – either to shift production capacity to the main company site of Alanod in Ennepetal or to continue production at the former Bluetec sites,” Schoonen explains. It is now clear that Alanod will take over all of Bluetec’s clients, and the product “Eta plus” will continue to be offered on the market, but will now be produced in the Alanod factory in Ennepetal. “The production facilities at Bluetec will be closed, and the current employment contracts will be terminated, inline with the contractually prescribed terms,” Alanod stated in a second press release sent out on 11 April 2014.
German competition authority not in charge
Alanod – already market leader in the solar thermal absorber industry – will again be able to increase its market share after the merger. The German competition authority, the Bundeskartellamt, says it is not in charge of supervising the sale, because both companies combined are below the level of EUR 500 million in worldwide business turnover. Alanod achieved an overall turnover of EUR 160 million in 2013, having 460 employees globally.
The collector manufacturers, however, are less enthusiastic about the concentration on the coating market. Multi-source strategies are an important tool for larger collector producers, which is why that the third-largest German coating specialist, Almeco Solar, will most likely profit from the merger at the top. The European solar thermal industry will also want to take a closer look at the youngest supplier of selective coating in Europe, Belgium company Arcelor Mitall.
More information:
http://www.alanod.com
http://www.almecosolar.com/de/
http://corporate.arcelormittal.com/