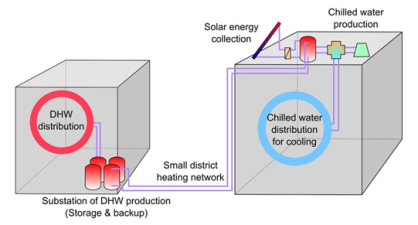 During the Task 48 meeting in Garching, Germany, at the end of September 2014, Daniel Mugnier, Head of Task 48 of the IEA Solar Heating and Cooling programme, presented the monitoring results of a promising demonstration project which integrates solar cooling technology into an existing building cluster. Engineered by Tecsol, the system has been supplying energy to two buildings housing offices and flats in Montpellier, in the south of France, since May 2012. The special characteristic of the system owned by the SERM (Société d’Équipement de la Région Montpelliéraine) is a hybrid mode in which the 240 m2 field with double-glazed collectors supplies heat to a single-effect lithium-bromide absorption chiller in summer, as well as domestic hot water to the block of flats all year round. During the main cooling season in July and August, the electrical coefficient of performance (COP) showed a very high average of 12, while the measured thermal COP during the same period was, on average, 0.6.
Figure: Tecsol
“Because of the high solar cooling load in summer, the planners have chosen a larger collector field which can contribute significantly to domestic hot water demand in autumn and winter,” Mugnier explains the optimised design of the hybrid system. After the first full year of monitoring between 18 March 2013 and 17 March 2014, the system showed a specific useful solar yield of 465 kWh/m2a for hot water and cooling. The solar yield comprises the heat energy distributed to the substation and its hot water tanks in winter, as well as the cold energy distributed in summer (see the chart above). The backup consists of a conventional compression chiller for cooling and of gas heaters for domestic hot water.
Double-glazed flat plate collectors on the roof of one of the buildings owned by the Société d’Équipement de la Région Montpelliéraine (SERM) in the south of France
Photo: Tecsol
The irradiation across Montpellier was 7 % lower in 2014 compared to 2013. Still, the latest monitoring results confirmed the high COPel average of 12, which is more than twice as high as the COPel of conventional electric vapour compression systems (COPel 2 to 5). The electrical COP is the sum of cooling energy plus solar-heated hot water divided by electricity consumed, whereas the thermal COP is the result of dividing the amount of cooling energy by chiller input (see the following table).
Comparison of monitoring results for the two main cooling months of July and August in 2013 and 2014.
Source: Tecsol
In a paper presented at the international Eurosun 2014 conference, Mugnier also emphasised the special features of the solar heating and cooling system (see the attached presentation; the paper will soon be available free of charge in Elsevier):
“The hybrid system in Montpellier has worked very well since it was commissioned in spring 2012,” Mugnier sums up his analysis of the 1.5-year monitoring. ”It is an interesting new idea to integrate solar cooling and solar water heating by means of a simple control linked through a mini-grid.”
The installation of this and four other demonstration plants was supported by the Emergence programme, an incentive scheme aiming at high-quality solar heating and cooling demonstration projects between 2010 and 2012. French engineering company Tecsol was responsible for the entire package: design, engineering and monitoring.
More information:
Emergence funds: http://www.solaire-collectif.fr/index.php?pid=20
http://www.tecsol.fr
http://www.serm-montpellier.fr
https://solarthermalworld.org/wp-content/uploads/2014/11/eurosun_mugnier_september_2014.pdf